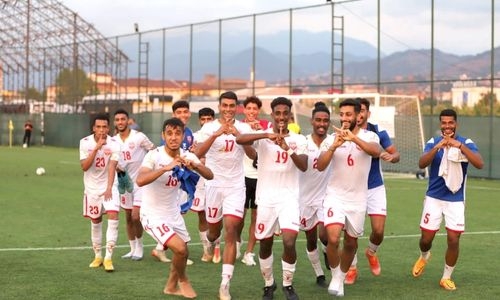 Bahrain’s under-23 Olympic football team defeated Al Faisaly Club of Saudi Arabia 4-1 in a friendly match played at their overseas training camp in Turkey. Hussain Abdulkarim scored a brace for the Bahrainis while Ahmed Abdulhameed and Bashir Fouad supplied the two other goals.

The contest was the fifth and final exhibition game for the nationals at their camp. They had won four of those tuneups while drawing the other. At the end of the friendly, Olympic team manager Mohammed Salman presented a memorial shield to Al Faisaly management as a token of appreciation for the match.

The Olympic football are using the camp to prepare for their upcoming competitions, including the qualifiers for the AFC U23 Asian Cup 2024, which will be held from September 4 to 12 next year. The qualifiers will determine the teams that will compete in the tournament finals, which will take place in January of 2024.

The AFC U23 Asian Cup is one of the premier continental events for Olympic teams. Bahrain have qualified for the event just once in the past, in 2020 when they did not make it past the group stage.