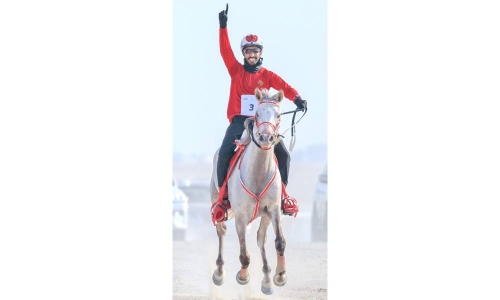 HH Shaikh Nasser bin Hamad Al Khalifa, Representative of HM the King for Humanitarian Works and Youth Affairs and Captain of the Royal Endurance Team, has hailed the Team’s triumph in the Jullianges International Endurance Championship thanks to Shaikh Mohammed bin Mubarak Al Khalifa who won first place in the 160 km.

From his side, Shaikh Mohammed bin Mubarak Al Khalifa has expressed his utmost thanks and appreciation to HH Shaikh Nasser bin Hamad Al Khalifa for His Highness’ constant support, stating that His Highness’ backing was a key factor for this win.

He pointed out that the event had witnessed stiff competition, adding that this success will be a great motivator ahead of the up-coming World Endurance Championship.

He further explained that the team is following the plan which was designed to get it ready for the World Endurance Championship.