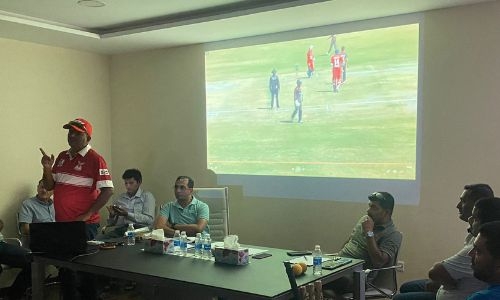 Bahrain Cricket Federation’s new operations team arranged a meeting with the Umpires on Wednesday. This was the first meeting arranged after the new committee took over under the leadership of Hatim Dadabai as President and Chairman Advisory Committee - Mohammed Mansoor.

A question-and-answer session was held with the Senior Umpires Mirza, Younis, Asim and Arfan Ghani along with live scenarios on what would be the possible outcome of decision if batsman / bowler / fielder does a certain action whether fair / unfair play and what penalty would be applicable in such case. Shukla also informed that no illegal bowling actions will be allowed in Division A and B. ICC protocol will be followed for action correction.

The BCF board aims a reformed system giving best climate of cordiality, display great professionalism and instant active services to the players, team, and cricketing fraternity bringing out the best competitive game and popularizing the sport in the Kingdom of Bahrain. For any interested candidate to register as cricket umpire with BCF may contact us on league@cricketbh.com with your credentials.

Afghanistan’s Taliban order women to cover up head to toe