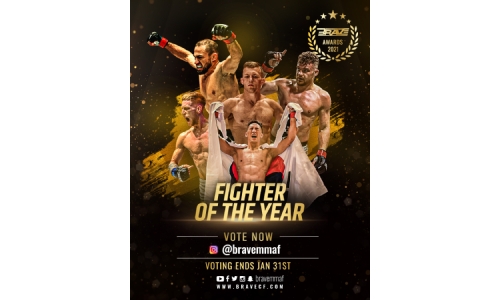 While all gallant warriors under the BRAVE Combat Federation umbrella go out and give it they're all inside the cage, there are just a handful of mixed martial artists who have shown the true championship quality over the past twelve months.

These competitors have gone above and beyond their limits, delighting fans with spectacular performances.

Moreover, these fighters have captured the imaginations of fans in their home countries and fans from all over the world.

Here are the nominees for the 2021 Fighter of the Year.

2021 has been a busy year for Ali “The King Puncher” Bagautinov, who won all of his fights that included two victories in the prestigious BRAVE CF Flyweight Title Tournament to punch a ticket to the finals against the highly-touted Velimurad Alkhasov at a yet-to-be-announced event in 2022.

Joining Bagautinov in the same category is Marcel Grabinski, a heavy-handed German who has gone 2-0 in 2021 and ended the year with a first-round demolition of Mihail Kotruta at BRAVE CF 54 this past September.

Meanwhile, Sam “The Future” Patterson could very well be the next challenger for Ahmed Amir’s BRAVE CF Lightweight World Championship in 2022 after racking up huge victories over the likes of Ylies Djiroun and Kamil Magomedov last year.

On the other hand, Brad “Superman” Katona was one of the blue-chip recruits who left a lasting impression in 2021, submitting previously-unbeaten Serbian Borislav Nikolic with a guillotine choke in the third round at BRAVE CF 50 in April and then following it up with a unanimous decision triumph against Russia’s Bair Shtepin four months later.

Katona will vie for the vacant Bantamweight World Championship against Hamza Kooheji at BRAVE CF 57, which is set to take place at the iconic Khalifa Sports City Arena in Isa Town, Bahrain on March 11.

Also making it to the list of nominees is Tae “Ares” Kyun Kim, who defied odds when he entered enemy territory to face Nurzhan Akishev in the main event of August’s BRAVE CF 53 and walked away with a unanimous decision win.

Fans will play a big role in determining the winner of 2021’s Fight of the Year by visiting the official Instagram page of BRAVE CF and casting their votes.