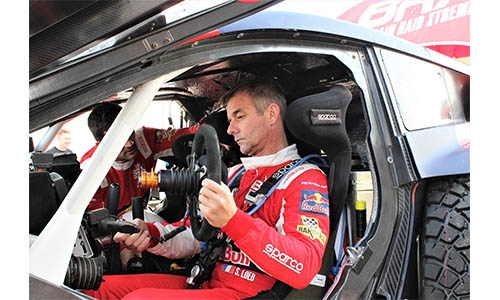 Nine-times World Rally Champion Sebastien Loeb believes that thorough testing in the UAE this week at the wheel of a car powered by a new sustainable fuel can boost his challenge for a first Dakar Rally victory next month.

The world’s most successful rally driver and his Bahrain Raid Xtreme (BRX) teammates Nani Roma and Orlando Terranova have been taking part in the second wave of tests in the Emirates at the wheel of the Hunter T1+.

“This is extremely valuable testing as we have all the conditions here that we’re going to face in the Dakar,” said Loeb, accompanied by co-driver Fabian Lurquin.

“Added to that, it’s a perfect opportunity for us to work together to concentrate our efforts on navigation which is where the Dakar will be won or lost.”

Terranova, partnered by Dani Oliveras, commented: “It’s my first time in the new car and it is great to experience it in the same conditions as we will find on the Dakar in four weeks.

Dani and I have been working on our navigation as it will be crucial in Saudi Arabia not to make any mistakes.”

Roma and his co-driver, Alex Haro, had previously spent five days in the Umm Al Quwain testing the Hunter T1+, which uses fuel that reduces greenhouse gas emissions by 80 per cent compared to petrol.

Over two weeks at the Dakar, the cars will race 8,500km across the deserts of the Kingdom of Saudi Arabia, starting in Ha’il and finishing in Jeddah, with a mid-event rest day in Riyadh.

The car now benefits from 37-inch tyres on 17-inch rims, with suspension travel increased from 280mm to 350mm and the body width increased from 2m to 2.3m to accommodate this.

These changes have necessitated a radical redesign of the Hunter, and Prodrive has used this as an opportunity to make further improvements, including a larger windscreen for improved visibility and refinement of several systems throughout the car.