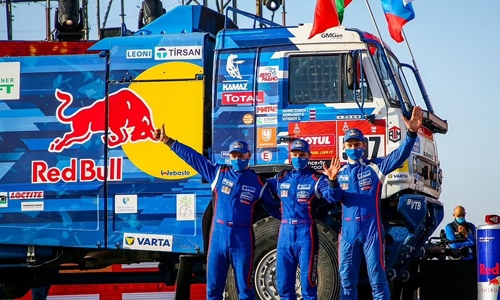 The Dakar rally will be raced across the daunting deserts of Saudi Arabia again in 2022 with organisers yesterday revealing the full route that exploits the depths of the Rub’ al Khali (Empty Quarter).

The January 1-14 endurance test will be a third Dakar rally in Saudi Arabia, a country accused by the international community of a poor human rights record.

But it will also be the 44th edition of the rally itself, with 1,065 participants aboard 578 vehicles racing across 8,375km of treacherous routes in the various categories.

The landscape and backdrop of the course are similar to the last edition, and it begins and ends after 12 stages in the port city of Jeddah.

From canyons and cliffs in the Neom region to stretches of dunes surrounding Riyadh, the race also takes in the Red Sea coastline and the mysterious Empty Quarter.

Hybrid vehicles make their debut with top contenders Stephane Peterhansel, a 14- time winner, and Carlos Sainz winner in 2010, 2018 and 2020 behind the wheel in the new category.

In the motorbike race previous champions Toby Price, Sam Sunderland, Matthias Walkner, Ricky Brabec and Kevin Benavides will all also be at the start line.

Motorbike and quad racers will be kitted out with airbag vests, which can minimise the consequences of high-speed impact.