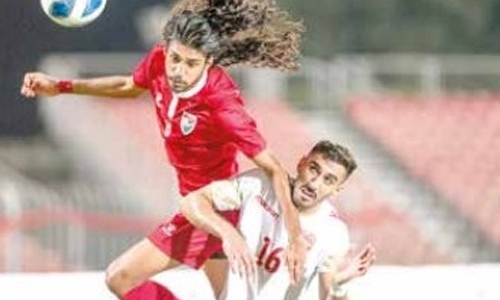 Bahrain’s Olympic football team outclassed their counterparts from the Maldives 3-0 last night to make a winning start to their qualification bid for the 2022 AFC U23 Asian Cup.

Midfielders Adnan Fawaz, Mohammed Qayoom and Abbas Alasfoor were all on target for the victors in the contest, which was played at the Shaikh Ali bin Mohammed Al Khalifa Stadium in Arad.

The Bahrainis could have had an additional goal but they missed a glorious opportunity when Saleh Mohammed Enad’s penalty kick was saved.

The game was Bahrain’s first in Group C of the qualifying competition, while the Maldives suffered their second defeat and are out of contention for an U23 Asian Cup berth.

They had earlier lost to Iraq 0-4 in their first game.

The Bahrainis and Iraqis now face off for first place in the group, which would ensure them a berth in next year’s showcase.

That match is scheduled for Sunday at the same venue with a 7.15pm kick-off.

A loss or draw for Bahrain could keep them as group runners-up, and they will have to be one of the four best second-placers to earn a place in the U23 Asian Cup.

Fawaz put Bahrain ahead in the 16th minute, firing into the bottom-right corner amidst a crowded box following a scramble for the ball.

Fawaz saw an opening and did well to hit his low effort through, giving the Bahrainis a slim 1-0 lead at the half.

Enad then had his penalty attempt early after the interval saved by Maldives goalkeeper Ali Naajih.

But Mohammed Qayoom made up for that lost chance just moments later when he scored from close range in the 55th minute to make it 2-0.

The Bahrainis were then awarded another spot kick when Fawaz was taken down in the box. Alasfoor this time stepped up to take the shot, and he made no mistake, sending the ball directly to the top-right corner of the net for the final nail in the coffin.

A total of 39 nations are participating in the qualification competition.

They have been divided into 11 groups, with 15 spots available at next year’s AFC U23 Asian Cup.

The 11 group winners and four best second-placed teams seal their qualification to the finals.