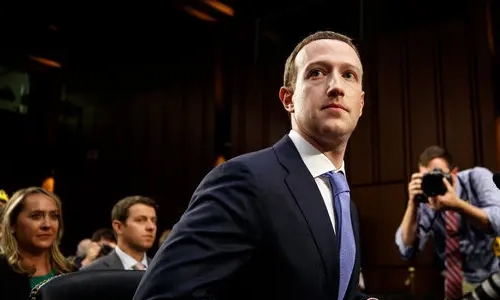 Mark Zuckerberg said it was "ridiculous" for people to think that he changed Facebook's name to Meta because of the recent wave of backlash.

The CEO told The Verge in an interview - which was published shortly after the name change was announced Thursday - that the current news cycle had no effect on the decision.

"Even though I think some people might want to make that connection, I think that's sort of a ridiculous thing," Zuckerberg told the outlet. "If anything, I think that this is not the environment that you would want to introduce a new brand in."

Facebook has been rocked in recent weeks by a trove of internal documents that the former employee turned whistleblower Frances Haugen shared with the press, as well as with the Securities and Exchange Commission. The material, known as the "Facebook Papers," includes employees' concerns about the company's conduct.

Facebook pushed back on the characterization and said the documents didn't paint a full picture of the company.

Zuckerberg said he had been considering a rebrand since about 2014, when Facebook bought Instagram and WhatsApp. But it was earlier this year that he decided the time had come for the switch, he said in the interview.

The name change was expected to reflect Facebook's push into the "metaverse," a virtual universe in which people interact digitally using avatars. Zuckerberg demonstrated what that could look like during Thursday's Oculus Connect event, displaying examples of how the metaverse could influence our social and work lives.

While experts previously told Insider that the metaverse emphasis was a "genius" marketing move, the company isn't free from widespread public backlash.

And the name change isn't enough to save it from the torrent of criticism, experts told Insider.

But Ashley Cooksley, the managing director for North America at the Social Element, previously told Insider Facebook's name change could save its other projects - like Horizon - from being associated with the bad press.

"If it's only the holding company that changes its name, it's presumably more about distancing the parent company from the Facebook product so that any toxicity in Facebook stays within that one product, rather than 'infecting' other brands under the parent banner," Cooksley said.

US to provide $144 million in humanitarian aid to Afghanistan