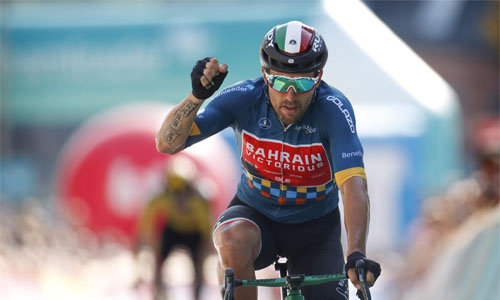 Team Bahrain Victorious rider Sonny Colbrelli was crowned winner of the General Classification in the Benelux Tour, which came to a close yesterday after seven stages across Belgium and the Netherlands.

The event was part of the 2021 calendar on the UCI World Tour. Colbrelli was joined on the overall podium by teammate Matej Mohoric after the pair finished with a one-two on the tour’s 181.8-kilometre final stage, featuring the traditional Flanders climbs as the Bosberg, the Denderoordstraat and the legendary Muur van Geraardsbergen. Mohoric was the victor while Colbrelli followed 11 seconds behind, enough to take the GC title by 29 seconds.

Following his tour win, Colbrelli commented: “One-two in the stage as yesterday and one-two in the general classification—something we can be more than proud of! “Today, I had to defend the leader jersey, but we were also trying to go for the stage as a team.

When Matej was leading, I controlled from behind, always trying to follow the various attacks. “In the final, [Tom] Dumoulin accelerated, and I must admit I struggled a bit to follow him. In the end, we managed to realise our plans, and that’s amazing.” Mohoric added: “It was like a dream for us today.

It’s a super proud moment for the team and one of the most significant victories for us. “The first goal of today’s stage was to defend the GC.

I also was second overall, so we were thinking about that as well. The stage win was a goal too, but it was not likely. We took control immediately after the breakaway was established.

We worked super good as a team in front. “In the final, [Kasper] Asgreen attacked, and I immediately followed with [Victor] Campenaerts, and we bridged over to the breakaway.

I wanted to save my legs to the finale also to help in case of need for Sonny. “Then when I saw the opportunity on the last climb of the Muur I tried to go for the stage win. Sonny protected me from the back.”