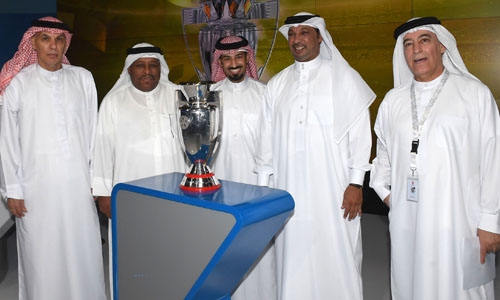 Holders Riffa have been drawn against Al Hala in the Round of 16 of His Majesty the King’s Cup football tournament. The draw for this upcoming stage of Bahrain’s richest football competition was held last night with the participation of Bahrain Football Association officials.

The Riffa-Hala match-up is one of only two games involving teams that are both from the Nasser bin Hamad Bahrain Premier League. The other is Al Khaldiya going up against Budaiya.

The rest of the fixtures see East Riffa pitted against Bahrain Club, Manama going against Galali, Muharraq facing Al Malkiya, Al Ahli playing Al Ettifaq, Al Najma battling Busaiteen, and Hidd taking on Sitra. Bahrain Club, Sitra, Ettifaq and Galali are all competing in the Round of 16 after winning their matches in the preliminary round.

The HM the King’s Cup football tournament is a knockout competition that is the richest in Bahrain. The champions each year receive $200,000 in prize money, while the runners-up get $80,000. Riffa are the two-time defending champions, having won the prestigious title the past two seasons.

Muharraq are the most successful team in the competition, winning it 33 times. Ahli follow with eight victories with Riffa third on seven.