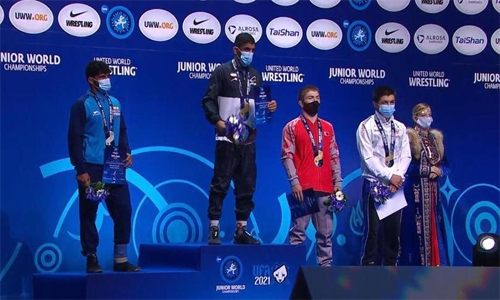 The Kingdom of Bahrain has achieved the bronze medal in the 61kg class at the World Youth Wrestling Championships, held in Russia on August 16-22, 2021. The accomplishment was made by the Kingdom’s wrestler Ali Baik.

The event featured 500 wrestlers from both genders who represent associations under the umbrella of the International Federation. On this occasion, HH Shaikh Khalid bin Hamad Al Khalifa, First Deputy President of the Supreme Council for Youth and Sports, President of the General Sports Authority and President of Bahrain Olympic Committee said: “We express our gratitude for this great achievement which was made by the Kingdom’s wrestling through Ali Baik in a prestigious event.

This success came thanks to the sponsorship and support of HM King Hamad bin Isa Al Khalifa, King of the Kingdom of Bahrain, the interest of HRH Prince Salman bin Hamad Al Khalifa, Crown Prince Prime Minister and the exceptional efforts of HH Shaikh Nasser bin Hamad Al Khalifa, Representative of HM the King for Humanitarian Works and Youth Affairs which enabled sports and sportspeople in Bahrain reach new heights.”

His Highness further added: “This result reflects the great performances that Ali Baik showcased throughout the event, combined with his desire and determination to raise Bahrain’s flag high in this major competition.”

Furthermore, HH Shaikh Khalid praised the enormous efforts being exerted by the Bahrain Wrestling Federation under the presidency of Abadah Adnan Al Mullah towards implementing plans and programmes that contribute to developing the wrestling sport in order to earn such honourable results under Bahrain’s name.

His Highness congratulated the Bahraini wrestler on this achievement. HH Shaikh Salman bin Mohammed Al Khalifa, Vice President of the General Sports Authority, President of Bahrain Combat Sports Council said: “We are happy with this honourable result which confirms that this game is moving on the right track as planned by HH Shaikh Khalid bin Hamad Al Khalifa according to the vision which was sketched by His Highness to develop this sport through the use of the work mechanisms designed to improve the national sports associations and federations operating under the umbrella of the Council.” Additionally, His Highness congratulated the bronze-medal winner on his achievement.