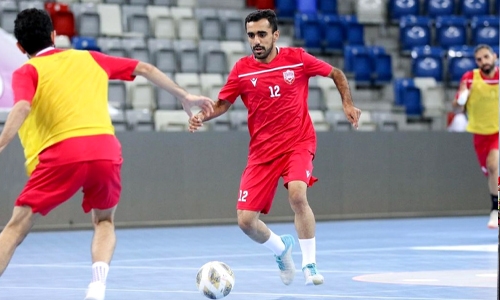 Bahrain’s national futsal team have stepped up their local training camp in preparation for the fifth Arab Futsal Cup 2021, which is scheduled to kick off in Egypt next week.

The competition is scheduled to be held from May 20 to 30, and the Bahrainis have been gearing up intensively under Brazilian head coach Lino Gomes. The final squad list for the tournament has yet to be determined, the Bahrain Football Association confirmed last night, but should be confirmed in the coming days. The team’s training is being held at the Shaikh Khalifa Sports City arena in Isa Town.

Bahrain have been drawn in Group A for the cup. The nationals are in Group A with hosts Egypt, Kuwait and Mauritania for the opening stage.

Group B consists of Morocco, the UAE, Saudi Arabia and Comoros. The Bahrainis kick off their campaign on opening night against their Kuwaiti counterparts.

Egypt and Mauritania face off in the group’s other game that night. All four teams are back on the playing court on May 22, when Bahrain play Mauritania and Egypt go against Kuwait. The final Group A games are then scheduled for May 24, when the Bahrainis play their Egyptian counterparts and Mauritania take on Kuwait. The top two teams from each group at the end of this opening phase move on to the last four, which are scheduled for May 27. The final will then be held on May 29.

The Arab Futsal Cup was last held in 2008, also in Egypt, when Libya were crowned back-to-back champions, after having also won in 2007. Egypt won the tournament’s first two editions, held in 1998 and 2005. They also were the runners-up the two previous times.