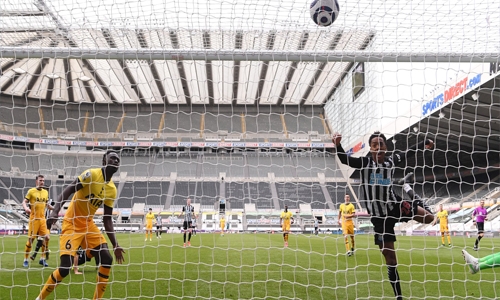 Tottenham’s bid for a topfour finish in the Premier League suffered a setback as Joe Willock’s late strike rescued a 2-2 draw for lowly Newcastle, while Southampton took a huge step towards survival with a 3-2 victory over fellow strugglers Burnley yesterday.

Jose Mourinho’s side were just five minutes away from moving into fourth place when Willock equalised at St James’ Park. Joelinton had put Newcastle ahead, but Harry Kane struck twice in four minutes before the break.

Even Kane’s latest heroics weren’t enough for Tottenham though and they now sit in fifth place, two points behind fourth-placed Chelsea with eight games left.

West Ham would climb above both of their London rivals into fourth if they win at Wolves on Monday. “I’m frustrated. We needed to win the match.

We created some instability with so many individual defensive mistakes that we made,” Mourinho said.“Of course, we had the biggest chance of the game to make it 3-1 and kill it, then we concede a goal the next minute.” Asked why Tottenham have struggled to hold onto leads when his teams have been so solid defensively in the past, Mourinho replied: “Same coach, different players.

“The Premier League is hard and is high-level football, and when in some actions you don’t show that you belong to that high level of football, it’s difficult.” Willock’s goal could prove invaluable for fourth-bottom Newcastle as they battle to avoid relegation. Steve Bruce’s side are without a win in seven games and sit three points above third-bottom Fulham, who would go above them if they win at Aston Villa.

Newcastle’s early pressure was rewarded, with an helping hand from Tottenham’s Japhet Tanganga, in the 28th minute.

Tanganga gifted possession to Matt Ritchie with a wayward pass and the Tottenham defender’s team-mates were slow to react as Sean Longstaff found the unmarked Joelinton, who slotted home from close range.

The much-maligned striker’s first goal since November proved a false dawn as Newcastle were ahead for just 90 seconds before Kane, fresh from ending his England goal drought, punished the hosts’ woeful defending.

Trying to cut out Giovani Lo Celso’s pass, Emil Krafth made a hash of clearing and Kane pounced on the ricochet to tap into the empty net.

Four minutes later, Kane bagged his 29th club goal of the season in ruthless style as he raced onto Tanguy Ndombele’s inch-perfect pass and fired into the far corner.

But Kane was denied a third goal when he hit the post and moments later Newcastle snatched an 85th-minute equaliser.

Joelinton headed Ritchie’s cross back across goal and although Hugo Lloris kept out Miguel Almiron’s header, onloan Arsenal midfielder Willock slammed home off the underside of the bar. At St Mary’s, Southampton moved 10 points clear of the relegation zone with eight games left after a dramatic fightback.