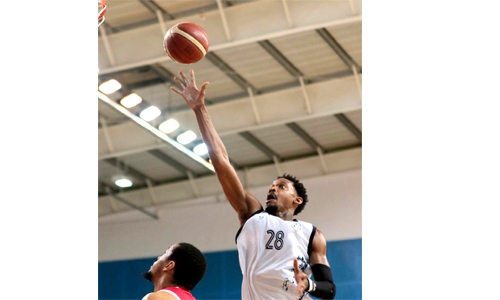 Al Najma secured the bronze medals in the 2020/2021 Zain Bahrain Basketball League last night following a comefrom-behind 89-83 victory over Muharraq in the one-off game for third place. Big man CJ Giles spearheaded the victors in the contest with a monster outing of 32 points, which included three three-pointers, 20 rebounds and three steals.

Najma fell behind by as many as 11 in the second period, but were able to fight back over the final two quarters to take control of the game and ride their momentum all the way to the final whistle.

With the result, Najma join league finalists Al Ahli and Manama in the top three, which is their best finish in recent years.

Meanwhile, Muharraq, who revamped their squad ahead of the current season, were left disappointed.

Muharraq enjoyed a comfortable 46-37 advantage at the half but then Najma came alive after the break and got to within two points, 62-64, heading into the final canto.

There, they were able to take the lead for good at 67-64 in the first minute on a CJ Giles three-pointer, and went up by as many as eight points the rest of the way.

After a Giles dunk made it 87-80 with around 50 seconds remaining, Hussain Shaker fired in a triple to get Muharraq back to within four.

But that was as close as they would get and Najma skipper Fadalallah Abbas made two free-throws with half-a-minute to play to peg the final score.

Hussain Mohammed added 15 points for Najma in the win, all from beyond the three-point line.

Ali Jaber chipped in with 12 while Qassim Hassan and Abbas each finished with 10 points.

For Muharraq, American Chris Johnson had a 36-point, 12-rebound effort in the loss.