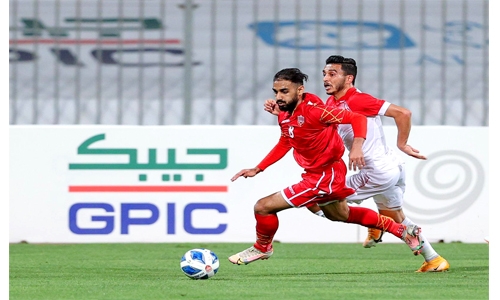 Bahrain fell to Jordan 1-2 last night in an international friendly match played at the National Stadium in Riffa.

Baha Seif and Yazan Alnaimat scored on either side of halftime for the visitors, while Mohammed Al Rumaihi fired in the home side’s lone consolation from the penalty spot.

The tune-up was part of both teams’ preparations for their upcoming joint-qualifiers for the FIFA World Cup 2022 and AFC Asian Cup 2023.

The match also marked the end of the national team’s latest local training camp, conducted by head coach Helio Sousa and his staff.

It was the second international friendly of the camp. Bahrain previously played Syria last week in a game they won 3-1.

Jordan went ahead in the 31st minute with Seif ’s goal.

The young forward was on the receiving end of a long cross from near the midfield line from defender Ehsan Haddad, and did brilliantly to time his header to score his team’s opener.

Seif made the most of Bahrain’s poor marking in the possession, and it was enough to give Jordan the advantage at the break.

The Jordanians then doubled their advantage seven minutes after the restart when Alzaimat scored off a cross from the right wing with a short stab.

Bahrain were able to get a goal back when they were awarded a penalty after Mohammed Marhoon was brought down in the box in the 76th minute.

Al Rumaihi stepped up to take the spot kick and fired the ball into the bottom-right corner Marhoon then had a brilliant chance in the 83rd minute to equalise, but his volley attempt from inside the box was just wide of the target.

The Jordanians, coached by Belgian Vital Borkelmans, had Ahmed Nawwas in goal; Tareq Khattab, Yazen Alarab, Mohamed Aldmeiri and Haddad in defence; Yousif Rawashdeh, Nooraldeen Alrawbdeh, Ahmed Saleh and Mousa Suleiman in midfield; and the strike partnership of Baha and Alnaimat up front.

Bahrain’s remaining joint-qualifiers are set to be played in June.

The games, as currently scheduled, are to be against Cambodia on June 3, Iran on June 7 and then Hong Kong on June 15.

The nationals are currently second in Group C behind Iraq.