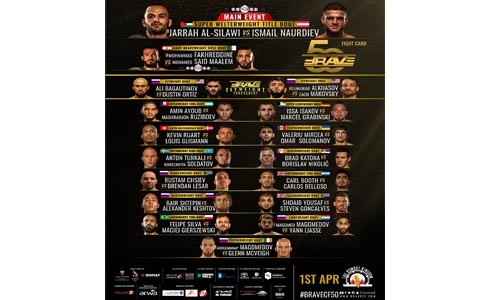 BRAVE Combat Federation’s return to Kombat Kingdom will come to an astounding climax with BRAVE CF 50 taking place on April 1st at Arad Fort in the Kingdom of Bahrain.

To celebrate being the only promotion in the world to visit 21 countries in its first 50 events, BRAVE Combat Federation is hosting the biggest fight card in BRAVE CF history with 17 fights in one night and representation from 25 countries.

BRAVE CF 50 will also include two bouts of the Flyweight tournament.

Russia’s mixed martial arts legend Ali “The Puncher King” Bagautinov will face off against one of the top Flyweights in the world Dustin Ortiz in a quarter finals bout of the tournament, while KHK MMA’s Velimurad Alkhasov will rematch Zach Makovsky in a Flyweight tournament semi-final bout.

The current BRAVE CF Lightweight World Champion Amin Ayoub will also be fighting on the card, however it will be a non-title fight against Mashrabjon Ruziboev in a Catchweight 74KG bout.

Other notable names include Issa Isakov against Marcel Grabinski in a Super Lightweight bout, Louis Glismann against Kevin Ruart in a Super Welterweight bout, and Brad Katona against Borislav Nikolic in a Bantamweight bout, The number one sports media property in the Middle East BRAVE CF is bringing the toughest fights to one fight card for a spectacular night in Kombat Kingdom. The broadcast is scheduled to begin at 5:30 PM (GMT+3) on Thursday April 1st.

Fans from across the world can watch live and free on BRAVE CF TV.