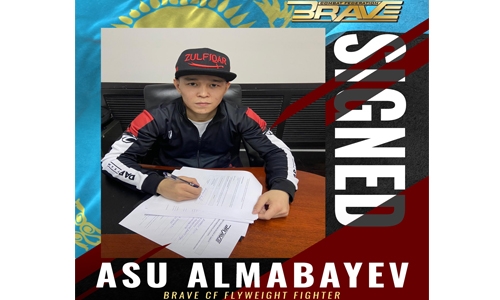 BRAVE Combat Federation has become the go-to destination when it comes to talent and exciting fights in the Flyweight division.

And the truly global MMA promotion added yet another big star to its stacked roster: Kazakhstan’s Asu Almabayev.

Currently, on an impressive eight-win streak, Almabayev boasts a professional record of 12 wins and only 2 losses. A former M-1 Global interim champion, Almabayev acknowledged the depth of talent in the BRAVE CF 57kg-division but promised to take over. “I’m proud to announce my signing with BRAVE Combat Federation”, he said.

“They are the fastest-growing MMA promotion in the world and BRAVE CF is my home now. They have a world-class Flyweight division, filled with great fighters, and the best tournament in the division’s history.

I will come in and take over the division”. Despite not being able to join the ongoing Flyweight World Title Tournament, the prestigious competition to decide BRAVE CF’s first Flyweight world champion, Almabayev will be able to build his way up in order to challenge the champion to be crowned.

In the Flyweight division, often considered one of the most overlooked divisions in the entire MMA world, but which gets a prominent position within BRAVE Combat Federation, Asu Almabayev will join the likes of Jose “Shorty” Torres, Dustin Ortiz, Zach Makovsky, and Velimurad Alkhasov, to name a few.