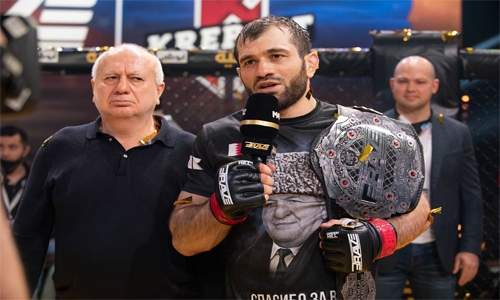 Eldar Eldarov kicked off 2021 in style, with the first successful defence of his BRAVE Combat Federation world title at BRAVE CF 46, in the headliner of the organization’s first-ever trip to his native Russia.

Right after his astonishing win over top contender Leonardo Mafra, however, Eldarov immediately put on his coaching badge back on and predicted an unforgettable year for his pupils at KHK MMA, both in Bahrain and Dagestan.

Currently hosting the likes of Ikram Aliskerov, Murtaza Talha, Muhammad Mokaev, Ahmed Amir, Hamza Kooheji among others, Eldar has tipped his students to have an amazing new year. ‘’This belt is for KHK. My belt is KHK’s belt.

It will always and forever stay in KHK. And, God willing, it won’t be the last one. This year, watch out for KHK, we will get more belts’’, said an ecstatic Eldarov, right after beating Mafra and defending his Super-Lightweight crown.

Ikram Aliskerov is on pole position to get the first shot at Mohammad Fakhreddine’s recently conquered Middleweight world title.

Aliskerov holds the record of most BRAVE CF Middleweight wins with six, but a trip to Welterweight cut short his time in the division.

As he started his descent to Middleweight, Murtaza scored a big TKO victory over Dmitriy Krivulets and positioned himself nicely for a big 2021 - Talha expressed his desire to fight at least four more times throughout the year.

Hamza Kooheji and Ahmed Amir are also on track to get title shots in the new year.

Kooheji is on a four-fight win streak and nearing a Bantamweight title shot, while Amir has two huge wins under his belt and is knocking on the door of Amin Ayoub, the current BRAVE CF Lightweight champion. Finally, Muhammad Mokaev is tipped to have a breakout year in 2021.

Currently training in the Kingdom of Bahrain, ‘’The Punisher’’ has announced his drop to Flyweight and is hoping to get the first crack at the world champion, which will be crowned in the biggest tournament for Flyweights in the history of the sport.