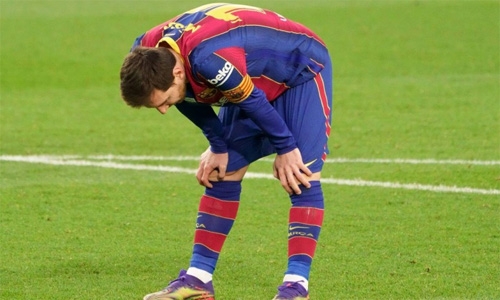 Messi and Griezmann brings Barcelona back to third

Barcelona moved to third in La Liga with a 4-0 win over Granada thanks to two goals apiece from Lionel Messi and Antoine Griezmann.

Real Madrid remains second after drawing 0-0 with Osasuna in snowy Pamplona. Earlier Atletico Madrid’s game with Athletic Bilbao was cancelled because of the weather, according to Deutsche press agency (dpa).

Messi’s double left him on 11 goals for the season and makes him the top scorer in Spain - in a season where he has struggled for form.

Barcelona took the lead on 12 minutes when a Sergio Busquets pass intended for Messi was diverted into the path of Griezmann by Roberto Soldado.

The French forward was offside when he scored but with Soldado having given him the ball it did not matter and the goal stood.

Granada were upset about the second too. Messi doubled the lead curling a left-foot shot past Rui Silva from just inside the area after being played in by Griezmann.

Busquets had handled in the build-up but Messi’s 10th goal of the season stood and three minutes before half time he had goal number 11.

Pedri was flattened on the edge of the area and Messi curled a low free-kick past Silva to make it 3-0. This time there could be no complaints for Granada.

On 63 minutes Barcelona got the fourth with Griezmann scoring with delicate volley after receiving Ousmane Dembele’s pass.

Barcelona were home and dry now and Ronald Koeman gave Messi the last 20 minutes off with Martin Braithwaite taking in his place.

Granada’s misery was compounded when Jesus Vallejo was sent off for bringing down the Danish substitute.

“I’m pleased to score the two goals and to get another win," said Griezmann. "We have to keep picking up three points and then let’s see what happens.”

The Moroccan striker opened his account on five minutes scoring from close range from Fernando’s assist.

A minute later Diego Carlos put past his own goalkeeper to level the score. But En-Nesyri scored an exceptional second on seven minutes dribbling past three Real Sociedad defenders before shooting past Alex Remiro.

On 14 minutes Alexander Isak made it 2-2 scoring from a corner to complete an extraordinary first quarter-hour.

The game calmed down but there was no stopping En-Nesyri completing his hat-trick scoring from Lucas Ocampos’ cross a minute into the second half.

“It’s my best day in a Sevilla shirt,” said En-Nesyri. “But we know it’s just one win, it doesn’t mean anything more than that and we have to keep going to achieve our objective.”

The fixture between Atletico Madrid and Athletic Bilbao was postponed due to heavy snow in Madrid.

The weather had prevented the Athletic squad from travelling to Madrid, where the game was supposed to take place at the Wanda Metropolitano stadium.

"As a result, on Saturday morning La Liga requested the [Spanish federation] RFEF Competition Committee to postpone the match due to the exceptional circumstances caused by the bad weather," Atleti said in a statement. A new date is to be announced in the next few days.

The postponement meant Atletico could lose top spot in the table to city rivals Real Madrid but they failed to win at Osasuna.

“There were very few chances in the game,” said Toni Kroos after the 0-0 draw. Asked about the difficult conditions he said: “There are no excuses; it was the same for both sides.”

Madrid failed to have a shot on goal in the first half. In the second period, Karim Benzema and Sergio Ramos had goals ruled out for offside as Osasuna took a deserved point.