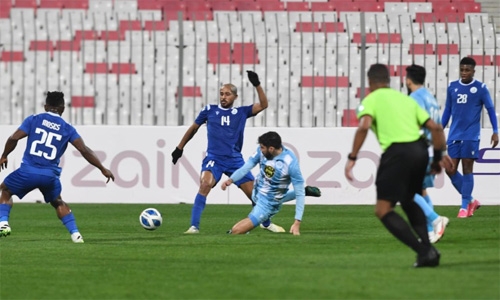 International player Al-Haram scored the only goal in the 59th minute which was played at Bahrain National Stadium.

East Riffar defeated Busaiteen 3-0 in the match which was played at Kifa Sports City stadium.

In a third match, Muharraq claimed its first victory after defeating Al Malkiya 2-0 in the match which was played at Bahrain National Stadium.

Abdelwahab Al Maloud and Ismael Abdellatif scored the two goals in the 19th and 58th minutes.

Riffa and East Riffa continue to top the table with 10 points each, followed by third-placed Hidd with 7 points.

Muharraq moves up to the 5th place with five points, followed by Budaiya and Al-Ahli with 4 points each. Najma and Al-Malkiya totalled (2 points) and (1 point) respectively, in the 9th place and bottom of the table.

Karzakan, Budaiya and Ittifaq on a winning streak