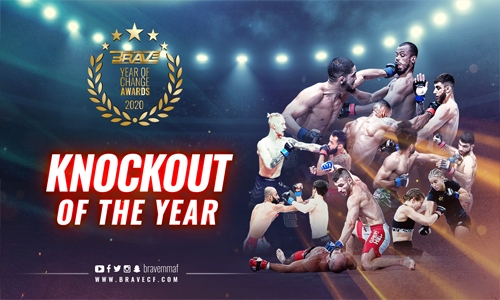 BRAVE CF had a memorable 2020 as the promotion navigated its way through the challenges of COVID19 to deliver 12 groundbreaking shows in four different countries. While memories from the year are aplenty, the knockouts artfully delivered by the athletes have been some of the most thrilling highlights.
To celebrate the top blows landed in 2020, BRAVE CF has now released the top seven knockouts of the year and fans have been entrusted with deciding the best KO of the year through online voting. This means that knockout of the year is aptly the first category from the prestigious awards to have all its nominees.
Seven athletes, all of them from different countries, have been nominated for the awards. The first nominee is Mihai Laurentiu who knocked out Ioan Vranceanu with a devastating head kick at BRAVE CF 35. Kevin Ruart, from Switzerland, is the second nominee on the list. His knockout of Ion Surdu with an impressive punch gave him victory in the first round in their bout in BRAVE CF 36. The next on the list is another kick, this time by Bianca Antman who earned a big statement win over Veera Nykanen with a stupendous head kick knockout at BRAVE CF 37.
Also featured is Rahmatullah Yousufzai who defeated Abdulmanap Magomedov with thunderous punches at BRAVE CF 41. Soon after Yousufzai's spectacle at BRAVE 41, Sam Patterson shocked the world on the same night with a clinical finish against veteran Felipe Silva. Patterson's sniping right hand-delivered the winning blow for the Englishman.
Amin Ayoub's title-clinching knock out of Cleiton Predator at BRAVE CF 44 is also featured. Amin gave the then champion his first TKO loss in 8 years. Yann Liasse's impressive win over Abbas Khan after an exhilarating flying knee and punches at BRAVE 44 also made the list.
The best KO will be announced based on the voting results from the fans who have the chance to vote by visiting BRAVE CF’s official Instagram account (www.instagram.com/bravemmaf). Nominees for other categories will be announced soon.