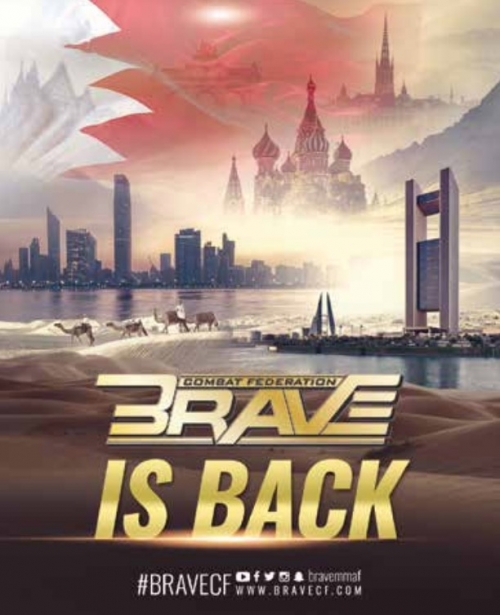 BRAVE Combat Federation, a product of HH Shaikh Khalid bin Hamad Al Khalifa’s vision, is back to holding events across the world, taking the Kingdom of Bahrain’s name to the highest places in sports. The announcement was recently made by BRAVE CF president Mohammed Shahid, who reinforced that the fastest-growing MMA organization on the planet will be back at the end of the month, with shows in Romania.

It will become one of the first sports properties to return to action with the Covid-19 pandemic, following all of the national and international guidelines to guarantee a safe environment for athletes and staff. The European invasion will continue after two shows in Bucharest, with Sweden also being home to a BRAVE CF event.

So far, BRAVE CF has travelled to 19 countries in seven different regions across its 34 events. In all of those shows, BRAVE Combat Federation makes sure to provide local fans, dignitaries and celebrities with the best action in mixed martial arts, while giving Bahrain the international exposure it deserves, aiding in the development of international relationships, tourism, and trade.

BRAVE CF is the biggest exposure platform for Bahrain across the world, also because of its reach - the organization has TV deals with broadcasting giants in several key markets as well as local deals with some of the biggest networks in the countries the promotion visits.

BRAVE CF has hosted shows in Asia, Europe, Africa, North America, and South America, as well as the Middle East. Fastest-growing MMA promotion in the world In a little over three years of being in operations, BRAVE Combat Federation has achieved what no other organization in the world of MMA was able to achieve in the same timeframe.

With 34 events held in 19 countries (with three new destinations confirmed), BRAVE CF has become the only truly global promotion. In all of these nations, BRAVE Combat Federation makes it a point of pushing the envelope when it comes to finding new talent, developing the sport on a national scale, as well as empowering local federations and governing bodies to take mixed martial arts and combat sports to a new level.

BRAVE CF’s mission is to develop the sport globally, and that includes going to places where no other promotion has gone, and kickstart a true sports revolution by giving local fighters the global platform to showcase their talents, providing young athletes with a pathway to success.