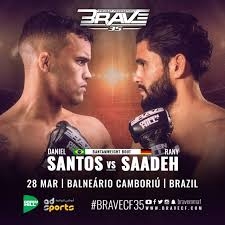 BRAVE Combat Federation’s return to Brazil will be a memorable one, with a title fight already confirmed between two of the best Lightweights in the world, as Cleiton “Predator” taking on Guram Kutateladze for the title at Bahrain’s top sporting enterprise.

Also on deck will be the return of two of Brazil’s biggest prospects - Gabriel “Fly” Miranda will look for his third BRAVE CF win as he takes on countryman Rafael “Morcego” Silva, while Daniel “Willycat” Santos looks to position himself for a title shot at Bantamweight against Germany’s Rany Saadeh.

Gabriel is one of the Featherweight division’s finest submission artists and has shown that in his previous two BRAVE CF wins, as he choked out both Fernando Noriega and Jon Zarate with his signature guillotine choke. “Fly” will have one of the biggest challenges of his career, as he takes on a veteran of the game in “Morcego”.

Rafael has 38 bouts to his name as a professional, with 31 victories against seven defeats. Silva has fought across the globe, in big markets such as the USA and Japan, as well as his native Brazil and will look to make a splash in his BRAVE CF debut. At Bantamweight, Daniel “Willycat” looks to continue his climb towards divisional gold.

After a stunning debut with an armlock at BRAVE CF 32, Santos returns home to challenge dangerous and well-rounded Rany Saadeh, who is coming off a loss in his BRAVE CF debut. BRAVE CF 35 will take place in Balneario Camboriu, Southern Brazil, on March 28th, with a fight card that will oppose the biggest Brazilian stars and top international athletes.