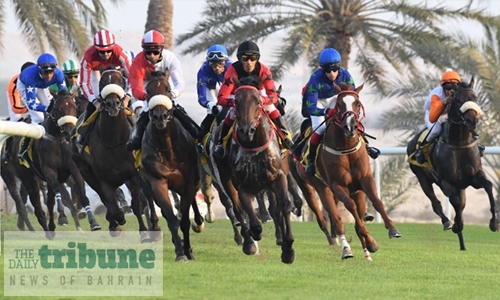 Rustang, Pressure Point and New Show have all been tipped to have a chance at lifting the Aluminium Bahrain (Alba) Cup today in the seventh and feature race at Rashid Equestrian and Horseracing Club (REHC) in Riffa. Rustang is owned by Al Adiyat Racing, trained by Alan Smith and will be rid- den by James Doyle.

Pressure Point will be competing for Al Mohamediya Racing, Smith and Paddy Mathers while New Show will be for Victorious, Hesham Al Haddad and Adrie De Vries. Another three imported horses are set to race in the 12-furlong event, which carries a total prize of BD5,000. They are Lugano of Al Mallah Syndicate, Nigel for Victorious and Port Douglas for Al Hassanain Syndicate.

There are three other Alba Cups to be won on the day, including in the first, fourth and the sixth races. In race one, set over a distance of 11 furlongs and offering a BD2,500 prize, seven locally bred horses are set to compete with Masharif for HH Shaikh Isa bin Abdulla bin Isa Al Khalifa, Aslaan for Al Afoo Racing Stable and Pulsar for Abdulla Fawzi Nass all with a chance. The fourth race is over five furlongs with a BD2,500 prize.

A huge field of 16 imported horses are set to take part; while in race six over eight furlongs with a BD5,000 prize, just five imported horses are entered, with those tipped to have a chance at winning being Thorkhill Star for Al Adiyat Racing, Austin Powers for Ramadhan Stable and Balestra for Al Mohamediya Racing.

In race two over six furlongs and offering a BD2,000 prize for local breeds, 14 horses are entered, with Dirab of HH Shaikh Hamad bin Abdulla bin Isa Al Khalifa, Galayid for HH Shaikh Mohammed bin Abdulla bin Isa Al Khalifa and Batmobile for M and E Racing. Race three will be over five furlongs with a BD6,000 prize for the Southern Governorate Cup.

Seven horses are to race in the WAHO event, including Krayaan 1706 for Victorious, Al Jellaby 1683 for Al Sakhir and Kuheilan Umm Zorayr 1766 for Safra. The fifth race of the day is over eight furlongs with a BD2,000 prize for local breeds. Eleven horses are entered in the event. All are welcome to attend the races at REHC in Riffa.