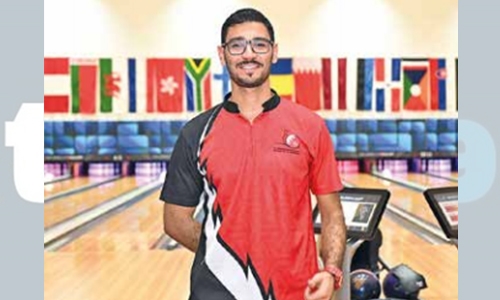 Bahrain’s Ahmed Al Awadhi secured his place in the top 24 at the end of the men’s qualifying stage yesterday in the 55th QubicaAMF Bowling World Cup, being played at Palembang, Indonesia. Al Awadhi was classified 14th overall as he joined the world’s top bowlers in advancing to the next round of the prestigious competition.

Al Awadhi was one of only two Arab bowlers to make it through in the tournament, which started with a total of 73 bowlers. Kuwaiti Jasem Alsaqer is the other; he was ranked eighth at the end of the qualification stage. Francois Louw of South Africa topped all qualifiers with a red hot 5,520 total and 230.00 average. Oliver Morig of Germany followed in second with a 5,332 score and 222.17 average.

Lee Wanhee of South Korea was third with counts of 5,155 and 214.79. Rounding out the top 10 were Ryan Lalisang of Indonesia, Sam Cooley of Australia, Christopher Sloan of Ireland, Jaroslav Lorenc of the Czech Republic, Alsaqer, Jay Leon Guerrero of Guam and David Maycock of Bermuda. Right in front of Al Awadhi from 11th to 13th were Tony Wong of Hong Kong, Renan Zoghaib of Brazil and Eugene Yeo of Singapore.

The top 24 men will now play a total of eight games today. The top eight at the end of this stage will earn a spot in the next phase, to be played tomorrow, again over another eight games. The top four will then advance to the semi-finals and finals, also tomorrow, on the World Cup’s concluding day