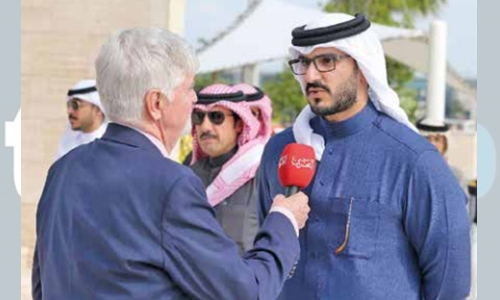 Local partners include Gulf Air, Bapco and Batelco. The main race will see nine thoroughbred race horses from around Europe join five local runners to battle it out on turf over 2,000 metres (10 furlongs). They were selected from 46 global entries, with all rated at or above 95 by their domestic authority, including six rated 106 and over. Starting gate positions were randomly selected during a Post Position Draw (PPD) event held at the Four Seasons Hotel on Wednesday.

Despite being the first occasion of its kind for the nation, Bahrain International Trophy has debuted as a key fixture on the racing calendar, both locally and on the world stage. Having attracted an unprecedented calibre of participants, the race has created a buzz amongst the global horse racing elite and is expected to spur on a new era of international horseracing events hosted by the Kingdom. Media teams and top photographers from leading international horseracing publications have flown in to capture the historic action.

Famous TV racing presenter Nick Luck and noted commentator Mark Johnson have also arrived to follow the extravaganza. Commenting on the stature of the race, Mark Johnson said: “Bahrain has become famous in the sporting world for staging one of the most popular grand prix motor races annually, and now this is a chance for the people of Bahrain to see a horse racing equivalent. “Amongst the 14 jockeys riding in the inaugural Bahrain International Trophy, seven are, or have been, national champion jockeys.

It is a truly international field and I would not be surprised if the finish is fought out by horses representing France, the UK and Bahrain. The French contingent are particularly strong, given Intellogent has already won at Group 1 level (the highest grade of racing).” The runners include Intellogent (Ireland), the first overseas-trained winner of a Group 1 race to run in Bahrain, with an accumulated £401,647 in career earnings.

He will be ridden by twotime champion jockey Pierre-Charles Boudot, who is one of the most recognised names in French racing, and is coming off a recent win at Europe’s most prestigious race, the Prix de l’Arc de Triomphe. HH Sheikh Hamdan bin Rashid Al Maktoum, Deputy Ruler of Dubai, will be showcasing his winning horse, Afaak (Great Britain), who took out this year’s Royal Hunt Cup at Royal Ascot, with trainer Charlie Hills. Mountain Angel (Ireland) has won twice this year in England, and placed second at one of the regional races.

His trainer is Roger Varian, a classic winner with 17 Group 1 victories to his name. Turgenev (Great Britain), nearly completed what would have been a famous five-timer for jockey Frankie Dettori at Royal Ascot earlier this year, and has since twice finished runner up to two subsequent Group winners. Royal Julius (Ireland), a Group 2 winner in 2018, has finished in the top five places from his last eight starts, with £469,000 in accumulated career earnings. Pivoine (Ireland) will be ridden by three-time champion jockey Silvestre De Sousa, in what will be his third international trip of the year, following outings in the US and Canada.

Runners and jockeys will be accompanied by equally famous owners, including Fiona Carmichael, Ziad A Galadari, Godolphin and King Power Racing, along with world-class trainers, such as Fabrice Chappet, John Gosden OBE and Andrew Balding, plus many more recognisable names.

The winner’s trophy, which was also revealed during the Post Position Draw, is as grand as the occasion itself, designed and handcrafted by House of Garrard. The event will be open to the public free of charge in addition to being broadcast live, locally on BTV and internationally on Racing TV. The festivities will include family-friendly entertainment options, as well as food and beverage vendors.