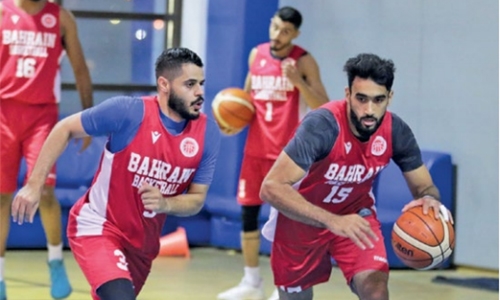 A roster of 14 players was confirmed yesterday for Bahrain’s senior men’s national basketball team, who will be travelling to Serbia today for an overseas training camp in preparation for the Gulf Basketball Association (GBA) Men’s Championship starting later this month. The regional competition is scheduled to be held from November 23 to December 1 in Kuwait City. Five teams are competing in the tournament, including Bahrain, the UAE, Saudi Arabia, Qatar and hosts Kuwait.

Bahrain’s newly signed head coach Darko Russo of Serbia has cut down a practice pool of over 20 players to the 14 ahead of the camp. Russo is in the early weeks of his stint at the helm of the national squad after taking over for Spanish coach Josep “Pep” Claros, who had suddenly resigned from his post. Russo is a highly regarded veteran tactician who has been coaching for over 20 years.

He had led the then-Yugoslavia national team to the bronze medals of the 1999 Fiba European Championship with a team that included popular former NBA players Vlade Divac and Peja Stojakovic. Bahrain have been practising over the past couple of weeks. The roster of 14 includes Bader Abdulla Malabes, Mohammed Buallay, Mohammed Juma’a and Ali Shukrallah from national champions Muharraq; Ahmed Aziz, Ahmed Najaf, Ahmed Salman, Mustafa Hussain, Muzamil Ameer and Mohammed Ameer from Manama; Subah Hussain from Riffa; Hesham Sarhan and Mohammed Qurban from Ahli; naturalised big man CJ Giles, who was the latest addition to the team’s line-up.

The GBA yesterday released the schedule for the competition, which is set to feature a single round-robin followed by the knockout semi-finals and final. The bottom team after the opening stage will be eliminated heading into the final four. Bahrain take on their Emirati counterparts on opening night, and then face off with Qatar the following day. They will then be idle on November 25 and will have another break with an official rest day the day after.

They then return to the hardwood to play Saudi on November 27, before locking horns with the home side on November 28 in the final round-robin game. The semi-finals on November 30 will then pit the top-ranked squad against the fourth-ranked team, and teams ranked two and three against one another.

The winner of both games move on to the title-decider on December 1, with the losers facing off in the bronze medal contest. Aside from the GBA championship, Bahrain are also preparing for the Fiba Asia Cup 2021 qualifiers, which will begin in February of next year. The squad will be further trimmed down to 12 for the GBA championship.