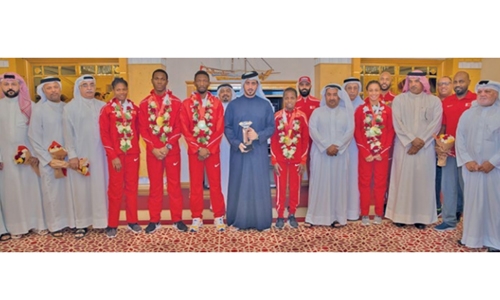 HH Shaikh Khalid bin Hamad Al Khalifa hailed the outstanding results made by Bahrain’s athletes in the World Athletics Championships. The Deputy President of the Supreme Council for Youth and Sports and President of Bahrain Olympic Committee was speaking as he received Bahrain’s National Athletics team members following their historic firstplace achievement at the Arab level (second at the Asian level and 12th overall) in the event after winning a gold medal, one silver and one bronze.

HH Shaikh Khalid said that this victory embodies the utmost sponsorship extended to the sports movement in the Kingdom of Bahrain in general and athletics in particular by HM the King who has been keen to pave the way for an ideal environment for the athletics national teams to enable them to achieve such accomplishments that reflect the huge development made by the sports field in Bahrain. Furthermore, HH Shaikh Khalid pointed out to the incredible performance produced by Salwa Eid in the women’s 400m final race which enabled her to win the gold medal en route to clocking the third-fastest time in history.

He also praised the displays of Rose Chelimo who won the silver medal in the women’s marathon race as well as the relay team after bagging the bronze medal in the mixed 4 X 400 race. “We are proud of the achievements of our champions. It was an epic event and they mirrored the perfect image for the Kingdom’s athletics,” HH Shaikh Khalid said, applauding the efforts of Bahrain Athletics Association under the leadership of Mohammed Abdulatif bin Jalal in preparing the athletes ahead of the event.