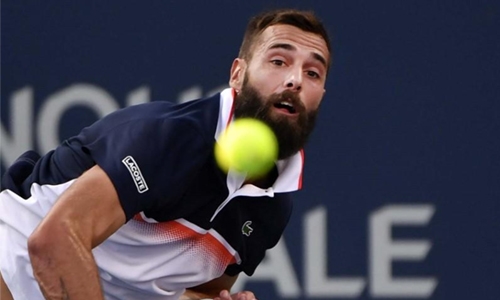 Top-seeded Benoit Paire reached the third round of the ATP Winston-Salem Open Tuesday, beating Prajnesh Gunneswaran 6-3, 7-5. France’s Paire, ranked 30th in the world, avenged a loss to India’s Gunneswaran at Indian Wells in March. Paire broke Gunneswaran in the penultimate game, then capped the contest with his 14th ace on match point to book a round of 16 meeting with fellow Frenchman Ugo Humbert, who defeated American Bjorn Fratangelo 3-6, 6-3, 6-2.

After enjoying a first-round bye, Paire was glad to get to work in the heat and humidity of North Carolina as part of his build-up to the US Open, which starts on Monday at Flushing Meadows in New York. “Honestly, I like to play before the Slam,” he said. “I did the same in Lyon the week before Roland Garros and I won the tournament and after I made the last 16 at Roland Garros so it was good preparation.

“I’ll try to do the same -- I’ll try to win a lot of matches here. I think it’s important for me to play before the US Open.” Second-seeded Canadian Denis Shapovalov also advanced, beating American Tennys Sandgren 6-2, 6-4. Sandgren, ranked 73rd in the world, was coming off a firstround victory over three-time Grand Slam champion Andy Murray, who was playing just his second singles match since the Australian Open as he bids to return to peak form in the wake of career-threatening hip surgery.

Sandgren battled back from 0-3 down in the second set -- going up a service break before Shapavolov came through with a break in the final game to seal the victory. “It was definitely a great win,” said Shapovalov, who hadn’t made it past the second round of an ATP event since Lyon in May and, like Paire, said he hoped a strong performance in Winston-Salem would be a springboard into the US Open. “I’ve been struggling a little bit during the clay and grass court season and the hardcourt swing,” he said.

“I thought it would be perfect to come play Winston-Salem, get a couple more matches under my belt and get ready for the Open. “So far, so good,” said Shapovalov, who next faces Serbian Miomir Kecmanovic, a 7-6 (7/5), 6-3 winner over Australian Alexei Popyrin. South Korean Lee Duck-hee’s ground-breaking tournament came to an end with a 4-6, 6-0, 6-3 loss to third-seeded Hubert Hurkacz of Poland.

Lee had become the first deaf player to win an ATP match with his first-round win over Henri Laaksonen. “I’m a little bit disappointed right now,” Lee admitted. “I had many chances that I didn’t utilise, but it was a great experience overall.”

Ajax finish with 10 men and a goalless draw in Cyprus