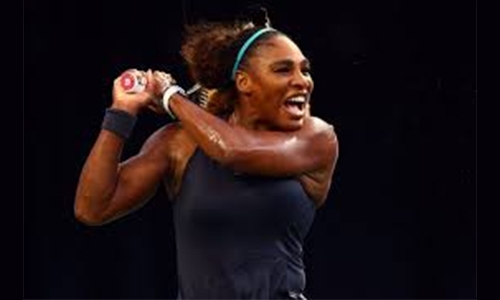 Serena Williams looked solid in her first match since losing the Wimbledon final, defeating 20th-ranked Elise Mertens of Belgium 6-3, 6-3 on Wednesday at the WTA Toronto tournament. The 37-year-old American, one crown shy of a record-tying 24th Grand Slam singles title, advanced in 75 minutes at her first US Open hardcourt tuneup event. “I feel like my movement is great -- been working on my fitness, so I felt like it really was able to shine through today,” Williams said. “I’m loving going out there and I’m loving kind of running.

So it’s a good thing.” Also moving into the third round was Japan’s Naomi Osaka, the reigning US and Australian Open champion. She won after taking the first set 6-2 when Germany’s Tatjana Maria retired with a left abdominal injury. With Osaka’s triumph, Australian Ashleigh Barty was ensured of being dethroned next week as world number one, although it could be Czech Karolina Pliskova instead of Osaka who swipes the top spot. Williams, ranked 10th, seeks her fourth WTA Canada crown after 2001, 2011 and 2013 and improved her match record at the event to 31-4, winning half the 10 break points she earned against Mertens.

“Now that I’m just injury-free, I’m just enjoying being able to train, and I haven’t been able to do it since January, really,” Williams said. “So I just think that the fact that I can train and practice and get in the gym is really going to be helpful for me.” Mertens broke for a 2-1 lead but Williams answered in the sixth game to pull level at 3-3. “I know when I got down one break I got real negative,” Williams said. “I don’t know what happened on the first time I got down. (She) just played really well. She’s obviously a really good player.

I just needed to just double down and get more focused.” Next in the path of the former world number one will be Russian qualifier Ekaterina Alexandrova, who eliminated China’s Zhang Shuai 6-4, 6-3. Osaka had not played a match since losing to Yulia Putintseva in the first round at Wimbledon. “I thought I played really well despite the fact that we only played one set,” Osaka said.

“I was able to do what I wanted, which was go for the shots that I had the opportunity to. “And, of course, there were a couple unforced errors, but I think that’s part of the process. “For me, I’m just happy that it was my first match in a while and I was able to get in the groove of things quickly.” The victory gives Osaka the inside track on taking the top spot in Monday’s new rankings.