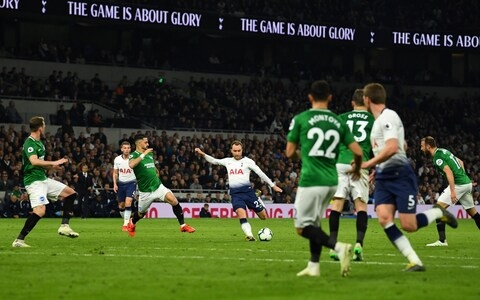 Mauricio Pochettino admitted his tired Tottenham stars are pushing themselves to their limits after Christian Eriksen’s superb late strike sealed a hard-fought 1-0 win over struggling Brighton on Tuesday. Pochettino’s third-placed side dominated from start to finish at the Tottenham Hotspur Stadium, but a combination of brave Brighton defending and poor finishing kept the match in the balance until the 88th minute.

Eriksen finally ended Brighton’s stubborn resistance with a sensational long-range drive that lifted Tottenham three points clear of fourth-placed Chelsea and four ahead of Arsenal in fifth. “The team are not as fresh as we wanted, not just legs, but minds, so we have to congratulate the players. I’m so proud of them,” said Pochettino.

“Brighton was a really brave opponent. The most important thing is we believed, we didn’t give up.” Although Arsenal could close the gap to one point if they win at Wolves, this was a vital result in Spurs’ bid to qualify for next season’s Champions League via a top-four finish. Tottenham have now won all four games in all competitions at their plush new arena, scoring eight goals without reply.

This was the most frustrating fixture at the £1 billion ($1.3 billion) ground as the hosts looked hamstrung without injured striker Harry Kane until Eriksen came to the rescue with his ninth goal of the season in all competitions. But Pochettino was delighted with the way his players kept plugging away right to the end despite the draining effects of their hectic fixture list.