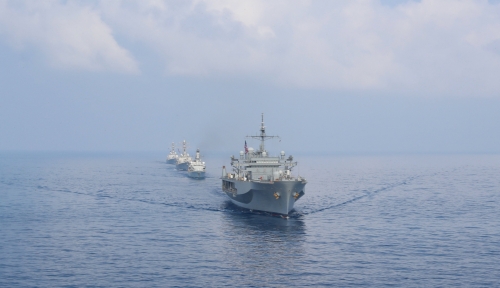 India will be soon joining the US-backed Combined Military Forces-Bahrain as an associate member, the White House said yesterday. This development came after discussions between the US President Joe Biden and Indian Prime Minister Narendra Modi in Tokyo, Japan, Reuters reported.

Both leaders were in the Japanese capital city for a meeting of Quad Group that comprises the US, India, Japan and Australia. Of the four, only India has not condemned Russia’s invasion of Ukraine despite pressure from the US for it to do so.

Biden told Modi he was committed to making the US-India partnership “among the closest we have on earth”. The Combined Maritime Forces (CMF) is a multinational maritime partnership, which exists to uphold the Rules-Based International Order (RBIO) by countering illicit non-state actors on the high seas and promoting security, stability, and prosperity across approximately 3.2 million square miles of international waters, which encompass some of the world’s most important shipping lanes.

Last week, a US Navy guided-missile destroyer seized 640 kilograms of methamphetamine worth $39 million from a fishing vessel while patrolling international waters in the Gulf of Oman yesterday. The vessel’s nine crew members identified themselves as Iranian nationals and were transferred to a regional nation for repatriation.

The international naval force has increased regional patrols to locate and disrupt unlawful maritime activity. The vessel was intercepted while transiting international waters along a route historically used by criminal organisations to smuggle people, weapons, narcotics and charcoal.

CTF 150 has conducted nine successful drug seizures in 2022, resulting in the confiscation of heroin, methamphetamine, amphetamine pills and hashish worth a combined value of $130 million. Combined Maritime Forces is the largest multinational naval partnership in the world.

The organisation includes 34 nations and is headquartered in Bahrain with US Naval Forces Central Command and US Fifth Fleet.