Economy failing on climate and equality: NGOs | THE DAILY TRIBUNE | KINGDOM OF BAHRAIN 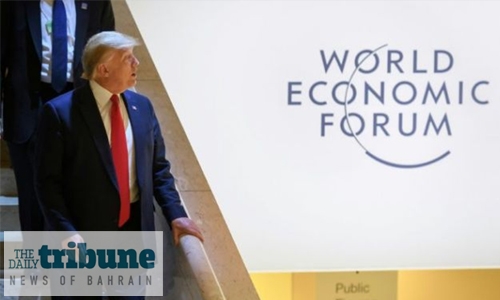 The world economy is a direct cause of social breakdown and a key driver of climate change, a green coalition said yesterday launching the first assessment of how governments are regearing their economies towards sustainable growth.

The Green Economy Tracker assessed how countries are performing in five key policy areas, including tackling inequality and prioritising nature in the face of the systemic risk posed by warming temperatures and rising seas. “Our global economy is not fit for purpose,” said Oliver Greenfield from the Green Economy Coalition, speaking on the occasion of the initiative’s launch in Davos.

“Inequality, poverty, climate change and biodiversity loss are not just connected. They arise from the same cause: how economies are organised, ruled and managed.” The global business elite are gathered in the Swiss alpine resort for the 50th edition of the World Economic Forum, and discussions so far have focused on the climate.

In its annual Global Risks Report surveying the main preoccupations of business leaders on the eve of Davos, the WEF said the top five global risks to the economy were all environmental. Oxfam on Monday highlighted the growing gulf in wealth, saying that the number of billionaires had doubled globally and were now richer than 60 percent of the global population combined.

The GEC said governments needed to realise that climate and the economy were intricately linked, and that action to shore up one would have tangible benefits on the other. “Within a generation we need to move to a green and fair economy that respect’s natures limits and prioritises wellbeing,” said Greenfield.

The tracker put Sweden at the top of countries surveyed for its national green economy plans, with France coming second. But it highlighted that “few countries” had yet taken steps to ensure a fair transition away from fossil fuels for millions of workers whose jobs may be affected.

“People must see their lives improve -- so a just transition is not just an aspiration,” said Guy Ryder, general secretary of the International Labour Organization. “It is a prerequisite to ensure societal and worker support and therefore success.”