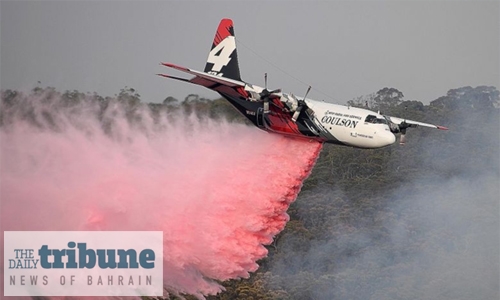 Three American crew helping to battle Australia’s devastating bushfires were killed yesterday when their water-bombing plane crashed in mountainous terrain during a sortie to tackle another outbreak of the deadly blazes.

Officials said the Hercules C-130 plane erupted in a large fireball on impact in a national park the Snowy Mountains shortly before 1:30 pm (0230 GMT). The cause of the crash was not immediately known, but New South Wales Rural Fire Service commissioner Shane Fitzsimmons had said earlier in the day that high winds were making flying the water tankers “very difficult”.

“We’ve got a number of firefighters and a number of crew that are in the area and working to contain and work around the fire,” Fitzimmons said. The incident brought the death toll in Australia’s bushfires to at least 32 since the crisis began in September.

The highly experienced US firefighting trio was working for Canadian firm Coulson Aviation, which had been contracted to help fight the fires. State Premier Gladys Berejiklian said the crash highlighted the danger faced by firefighters as they attempted to extinguish massive blazes across Australia’s southeast.

“There are in excess of 70 aircraft that have been used today alone and today is a stark and horrible reminder of the dangerous conditions that our volunteers, (and) our emergency services personnel... (face) on a daily basis,” she said.

The crash happened as at least seven fires, whipped up by scorching temperatures and strong winds, flared to emergency status following a brief lull brought by rain and cooler temperatures.

Bushfires also forced the closure of Canberra Airport yesterday, with all flights in and out of the country’s capital suspended to allow the deployment of aerial firefighting crews to battle the approaching flames.

Temperatures soared to 40 degrees Celsius (104 degrees Fahrenheit) in Sydney, where a bushfire also broke out in a northwestern suburb of Australia’s biggest city. Wind gusts had been forecast to reach 90 kilometres per hour (55 miles per hour) in some areas, but Fitzsimmons said the winds were stronger than expected, especially in the fire-ravaged southeast.

Unprecedented bushfires fuelled by climate change have devastated vast swathes of the country since September, destroying more than 2,000 homes and burning 10 million hectares (100,000 square kilometres) of land -- an area larger than South Korea or Portugal.