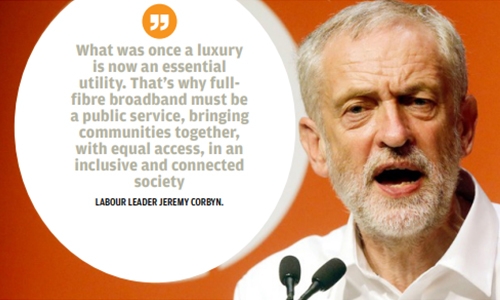 Britain’s main opposition Labour party yesterday promised free, fast broadband internet for everyone, in an eye-catching pledge for next month’s election. Following on from promises to nationalise the railways, the mail delivery service and water firms, Labour wants to bring the parts of telecoms firm BT that deal with broadband into public ownership.

“The internet has become such a central part of our lives. It opens up opportunities for work, creativity, entertainment and friendship,” said Labour leader Jeremy Corbyn. “What was once a luxury is now an essential utility. “That’s why full-fibre broadband must be a public service, bringing communities together, with equal access, in an inclusive and connected society.”

But Prime Minister Boris Johnson’s Conservative party called it a “fantasy plan”, while a technology lobby group said it would be a “disaster” for the industry. Labour says there would be a one-off cost to establish the network of £20.3 billion (23.7 billion euros, $26.1 billion), of which £5 billion has already been pledged by the Conservative government. The cost of privatising the relevant parts of BT, including Openreach, which runs much of Britain’s existing digital network, would be set by parliament and paid for by swapping bonds for shares.

Annual maintenance costs would be around £230 million, Labour said, to be covered by a new tax on global digital companies such as Amazon, Facebook and Google. But industry body TechUK warned the proposal was “fundamentally misguided” and would be “a disaster” for the telecoms sector and hit Britain’s rapidly growing digital economy. “Renationalisation would immediately halt the investment being driven not just by BT but the growing number of new and innovative companies that compete with BT,” said chief executive Julian David.

Conservative digital minister Nicky Morgan warned: “Jeremy Corbyn’s fantasy plan to effectively nationalise broadband would cost hardworking taxpayers tens of billions.” A BT spokesman said that rolling out high-speed broadband and 5G should be a priority for all parties. “We’d encourage the next government to work with all parts of the industry to achieve that. It’s a national mission that’s bigger than any one company,” he said.