One in five US Twitter users follows Trump: survey | THE DAILY TRIBUNE | KINGDOM OF BAHRAIN 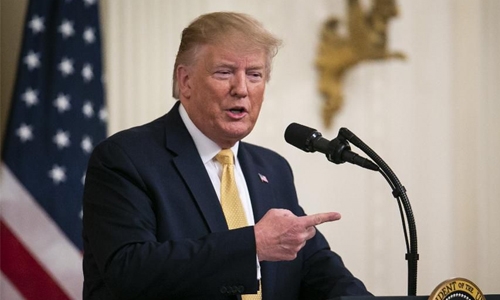 One in five US Twitter users follows Trump: survey

Nineteen percent of US Twitter users follow President Donald Trump on the social platform, and a majority of those people approve of his job performance, a survey showed yesterday. The Pew Research Center report suggests Trump’s @ realDonaldTrump account -- with more than 60 million followers worldwide -- has succeeded in developing an audience largely favorable to his comments, which often generate controversy.

The report is based on a survey of 2,388 US adults who use Twitter and gave Pew permission to review their personal public-facing accounts, between December 2018 and July 2019. Roughly three in 10 Republican adult Twitter users follow Trump, compared with 13 percent of Democrats, Pew said.

Among users who follow Trump, 54 percent approved of his job performance as of late 2018, compared with 24 percent of users who don’t follow the president. Despite the large following, Trump’s direct reach on Twitter is still limited, according to Pew: only 22 percent of all US adults use the service, its surveys found. And Trump’s reach on Twitter remains below that of former president Barack Obama, who connects with 26 percent of the platform’s users, Pew researchers found.

The news comes with Trump drawing fire for a series of tweets interpreted as attacking four progressive Democratic congresswomen of color -- calling on them to “go back” to their own countries, even though all are US citizens. Trump’s comments were branded “racist” and “xenophobic” by Democratic presidential candidates and senior lawmakers.

We Have Always Lived in the Castle: an arch, feminist fairy tale