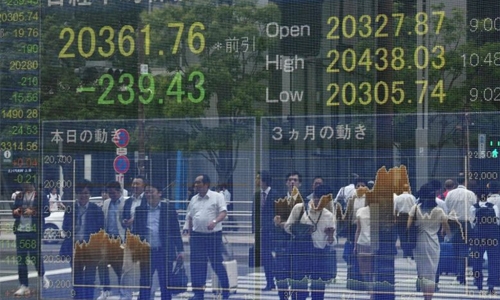 Stock markets extended their strong run higher yesterday, with the prospect of a US interest rate cut helping to offset trade war tensions according to traders. The dollar was mixed against main rivals, while the pound won support from official data showing UK unemployment held at a 45-year low point with a rate of 3.8 percent.

“Safe to say, the changing expectations for interest rates is the primary reason for such a strong rebound in the (stock) markets that didn’t look particularly likely at the start of last week,” said Oanda senior market analyst Craig Erlam. “Once again, it’s central banks that are left to fill the economic void, easing investor fears over trade wars and a global slowdown.” Friday’s weak US jobs report has increased expectations that the Federal Reserve will look to cut interest rates, weighing on the dollar but boosting stock markets around the world.

Brexit uncertainty has meanwhile reduced expectations of a rate hike from the Bank of England any time soon, while the European Central Bank has vowed support to stimulate a struggling eurozone economy. Rising prospects of a US rate cut come as President Donald Trump has threatened new tariffs against Beijing amid an escalating trade war. Trump said a meeting with Chinese President Xi Jinping had been “scheduled” during the G20 summit in Japan later this month. But China on Tuesday did not confirm any meeting.

A Trump-Xi meeting would mark a turning point in the bruising trade dispute between the world’s two biggest economies that has spooked markets worldwide and sparked worries about the global economy. At the same time, Trump’s decision to drop threatened tariffs on Mexico sparked relief across trading floors and led to hope that the row with Beijing could also end with some sort of agreement.

Current stock market gains were highly welcome after the US president shocked markets last month by hiking levies on $200 billion of Chinese imports, blaming backsliding over their long-running trade talks. Oil prices recovered, having dropped Monday on uncertainties about an agreement between crude producing nations to cap output.