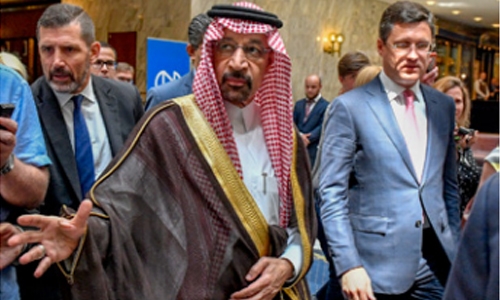 Russia yesterday warned of a strong risk of global overproduction of oil that could lead crude prices to drop below $40 a barrel. “There are really great risks of overproduction today,” Russian Energy Minister Alexander Novak said during a meeting with Saudi counterpart Khalid al-Falih in Moscow.

“We have to analyse everything... in order to take a balanced decision in July” he said, referring to a key meeting of the OPEC+ alliance between OPEC members and other oil producing countries including Russia. The alliance is set to meet in Vienna in the beginning of July according to the Saudi minister, to decide whether to extend an agreement on production levels. Russia has agreed with OPEC member countries on cutting production of crude to build up prices after the crash of 2014-15.

“Prices can drop below $40 and even down to $30 a barrel,” Russian Finance Minister Anton Siluanov told lawmakers on Monday, quoted by Russian agencies. Novak also said that such a scenario “cannot be ruled out”. “A lot depends on the situation on the market in the second and third quarter, from the balance of supply and demand, and how the situation develops with uncertainties, trade wars, and sanctions pressures on several countries,” he said.

“We are working to take preventative steps to avoid the scenario that was discussed,” Falih said regarding the prospects of prices falling to $30 a barrel, in translated comments.