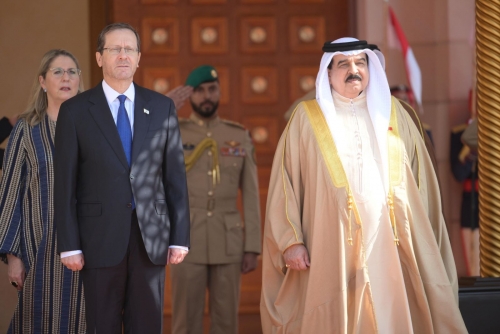 His Majesty delivered a speech in which he expressed hope that the visit will contribute to enhancing relations between the two countries.

“We are confident that this visit represents an opportunity to witness the beauty of the religious and cultural diversity in our country, and the spirit of friendliness, tolerance and peaceful coexistence among the members of our honorable society of all religions and races,” His Majesty said.

Talks focused on ways to bolster cooperation in the economic, trade, investment, scientific, technical, health, educational, youth, tourism and cultural fields. They also discussed ways to encourage communication between the representatives of the private sector in the two countries, and the exchange of the visits of official delegations, which will contribute to increasing the volume of bilateral trade exchange for the best interest of the two sides.

They also stressed the importance of activating the agreements and memoranda of understanding signed between the two countries in vital areas of common interest, as well as strengthening the role of the joint economic committees in advancing bilateral economic and trade cooperation, which would serve common interests.

HM King Hamad and President Herzog affirmed that the Abraham Accords and the Declaration Supporting Peace signed between the two countries embody their determination to promote the values of peace, coexistence and fraternity.

“The Kingdom of Bahrain firmly believes that dialogue and a peaceful and civilised approach are imperative for settling regional and international conflicts and disputes, and ensuring the rights of people to security, development and prosperity,” His Majesty said.

He stressed Bahrain’s firm support for a just, comprehensive and sustainable peace that guarantees the legitimate rights of the Palestinian people “that will lead to stability, development and prosperity for both the Palestinian and Israeli peoples, as well as all peoples of the region.”

The Israeli President expressed thanks and appreciation to HM the King for the warm welcome and hospitality accorded to him. He also expressed appreciation for HM King Hamad’s efforts to promote the values of peace, tolerance and coexistence among religions and faiths, as well as consolidate interfaith and inter-cultural dialogue.