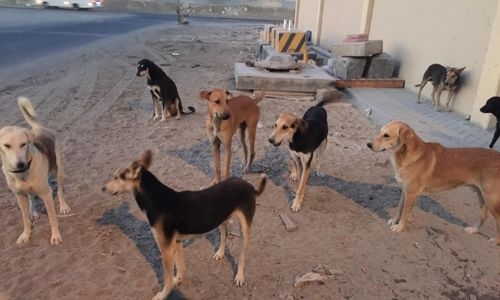 Measures sought against increasing numbers of stray dogs in Bahrain

Although Bahrain has been declared rabies free, the steep increase in the number of stray dogs is causing panic among both citizens and residents. Many stray attacks have been reported from all governorates, except the Southern, with hotspots being Gudaibiya, Askar, LuLu Road (Salmaniya), Nuwaidrat, Sitra, Sanad and Tubli. According to sources, the Capital Governorate is the most affected and the victims are mainly night shift workers. Speaking to The Daily Tribune, a 56-year-old expatriate woman, who was badly attacked by strays at a public garden located near LuLu Road, said she was horrified and took many days to come out of the trauma suffered in the attack.

“I always see close to 20 strays in the area, but never thought they would attack me. Since the rabies vaccine was unavailable here, I had to travel to India to receive them.” The victim said she fears for the school-going children, who could be attacked by the rising number of strays in the locality. There have been many reports of strays attacking children across the Kingdom in the past. Two years ago, a young boy suffered serious injuries after being attacked by a pack of stray dogs in Sanabis, which even caused an uproar in the Parliament with many lawmakers asking immediate action to control the increasing stray population.

When asked, Fathiya Al Bastaki, a passionate Bahraini animal lover and Bahrain Strays founder, had said increasing awareness along with spaying and neutering remain the only solution to fix the issue. “Strays will never attack anyone who completely ignores them since they are territorial beings. If you don’t stare at them, they would at best bark and leave you. Barking is just a form of threatening to protect their territories. Don’t bother about them, they won’t attack you if you are minding your own business.”

She said killing stray dogs is not at all a humane solution and it is just an uncivilised act . “ The country started its Catch-Neuter-Release (CNR) programme two years ago in order to control the overpopulation and that was really a good step, which everyone appreciated. But sadly, this process has been stopped now for almost a year although the residents didn’t stop from complaining. “The cleaning company later dumped dogs to Askar without spaying or neutering. My group and I had to do a lot of hard work to catch some females and transport them to clinics for spaying. Stray dogs in Askar never bothered Asian workers and no-one also complained about it. “Two weeks ago, we were shocked when we came to know that there was a decision to get rid of strays from Askar as we found dead bodies in some areas.

They were shot and the bodies were buried , but partially. We d o n ’ t know why the dogs were shot to death? No one had complaints in that area. “It’s inhuman to kill innocent animals, which caused no harm to anyone there and what is really weird is that how could they decide to kill dogs that were already spayed and neutered?” It is learnt that there are over 1,000 stray dogs in Askar, where the ministry has been dumping them for the past four years. Fathiya said neutering and spaying remain the only solution to fix the issue.

“I along with a group of volunteers have been spaying and neutering for over eight years now. The Works Ministry started it in 2020 and it has not been there for the past one year. “We have been taking the spaying process forward after receiving support from Her Highness Shaikha Noora bin Hamad Al Khalifa. Rehabilitation is not a practical solution as we have thousands of them.” She said there is no need to raise concern over “rabies infection” as there are no cases in the Kingdom. However, she highlighted the need to bring the canine distemper situation under control. “Unless all pups are vaccinated with two doses, we can’t bring the situation under control. We can’t do it for the strays.”