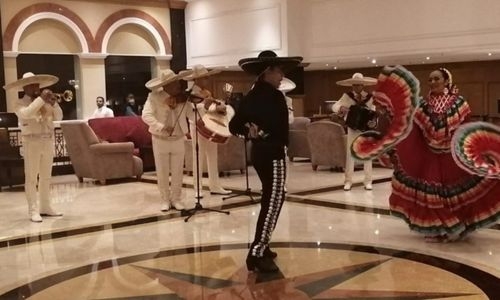 Mexicans in Bahrain have celebrated with great fanfare Mexico’s Independence Day and culture within the Mexican Food and Culture Festival. The festival, held on September 15-23 at the Gulf Hotel, showcases traditional folk dance, exhibits, paintings by visiting artists and other forms of entertainment. It highlights the ‘Mehico’ culture after the world has eased down after a long COVID pandemic hiatus. The performances from the Miriachi performers combine with traditional dancers from the Instituto Municipal de Culturay Educación in Mexico flown in especially for the festival.

Mexico’s Ambassador to Bahrain Anibal Gomez Toledo, who led the National Day celebrations in Manama, said that his country eyed deeper engagement on trade, tourism, investment with Bahrain. Mexico is keen on strengthening the existing friendly relations with Bahrain by exploring the avenues of co-operation in trade, tourism, investments, and other areas of common interest, he said. Toledo, who is based in Riyadh, said that the diplomatic relations between the two countries have been very friendly since their establishment in 1975.

Measures sought against increasing numbers of stray dogs in Bahrain