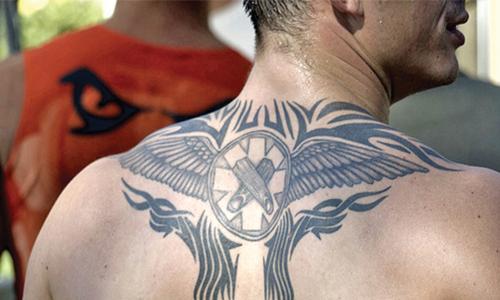 In an attempt to combat “alien fads” that are increasingly spreading in the Bahraini society, lawmakers are seeking to ban tattooing services in Bahrain.

Five MPs submitted a proposal last June to the Parliament’s Services Committee, seeking a ban on tattooing in Bahrain, be it done in beauty parlours or privately by individuals.

Justifying the proposal, the MPs said, “According to the second Article of the Kingdom’s Constitution, Islam shall be the religion of the State, Islamic Sharia a main source of legislation, and Arabic the official language. It has been proved that Prophet Muhammad (PBUH) prohibited tattooing.”

“We aim to maintain the Islamic identity of the Kingdom of Bahrain and we seek the protection of our youth from deforming their bodies with phrases and drawings that are against the teachings of Islam and Bahraini traditions,” they said.

The parliamentarians also confirmed that “the proposal comes to curb the promotion of this fad among the youth through social media.”

Agreeing to the proposal, the committee prepared a report on the matter that will be voted on at the weekly meeting of the Parliament on Tuesday.

The committee’s report included Health Ministry’s comments, which read, “The Ministry agrees to the recommendations in the proposal. We’ve always been concerned about not licensing

such services, as we’re convinced that it contains more harms than benefits. Additionally, no proper or licensed inks for tattooing are available in Bahrain.”

According to the Ministry, “tattooing services are wanted by many costumers in Bahrain, mainly those who follow the latest trends. Some of them seek tattooing for cosmetic purposes and body deformation corrections, such as lack of eyebrows hair or beautifying lips.”

“Many requests applied by beauty salons and parlors to practise tattooing were rejected in the past. The Commerce and Industry Ministry (Presently Commerce, Industry and Tourism Ministry) doesn’t allow such services in salons, considering the public’s safety,” the ministry explained.

Anyhow, the committee said it had received a letter from the Commerce and Industry Ministry, stating “the matter doesn’t come within its jurisdiction.”

The Ministry also quoted the Food and Drug Administration (FDA), which warned of the dangerous effects of inks used in tattooing, claiming that it could lead to diseases like Hepatitis and Aids.

‘Regulation will do’ Speaking to DT News yesterday, a local tattooist Ahmed Al Alawi called for regulating tattooing services in Bahrain, rather than banning it.

“The service isn’t commercially categorised in the country. There isn’t an official authority that allows or bans tattooing,” Al Alawi said, claiming that “the practice isn’t illegal; it’s not registered.”

Al Alawi who has been practising tattooing for six years in the neighbouring GCC countries, called for regulations to standardise the practice in Bahrain.

“There are rules in fellow GCC countries that regulate the practice. In Kuwait, for example, men should strictly apply tattoos for the same gender and the same goes for women. There are also certain hygiene standards for tattooists. We need such regulations in Bahrain.”

Al Alawi confirmed that there are hygienic violations in Bahrain related to tattooing, such as the multiple use of tattooing needles.

“Bahrain is a country that is open for expats and many of them love to get inked. It’s also a good mean to conceal body deformations such as scars, moles and lack of facial hair growth,” he commented.

He also confirmed that many ladies’ salons are practising tattooing, adding that he had trained a few ladies working in salons on the correct tattooing practice.

However, DT News did a small online research on the tattooing services in Bahrain. The results proved that quite a few outlets are offering such services on the island.

Brewing up a Dream