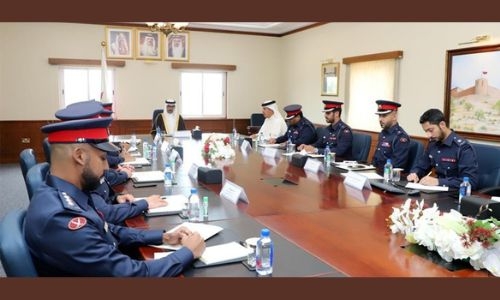 Southern Governorate’s security measures for ‘safety of all’ hailed

Southern Governor His Highness Shaikh Khalifa bin Ali bin Khalifa Al Khalifa has commended the outstanding efforts made by the security authorities in strengthening the pillars of security across the governorate’s regions. He praised the level of the ongoing cooperation and coordination between the governorate and the various security authorities, which enhances the governorate’s success in meeting the needs of citizens and residents in the security field. This came as HH Shaikh Khalifa bin Ali yesterday chaired the seventh meeting of the Security Committee for 2022.

He affirmed the keenness of the Southern Governorate to coordinate and make security arrangements with various security authorities and the heads of community centres (Ma’atams) during the month of Muharram for the year 1444 AH, in accordance with procedures and an atmosphere in which security and tranquility prevail by strengthening the necessary security measures and preparations for Ashura Commemoration, in line with the Interior Minister’s directives in this regard.

HH Shaikh Khalifa bin Ali was also informed, through a video presentation, about the efforts of the General Directorate of Civil Defence to organise security awareness campaigns targeting various factories and industrial workshops within the Southern Governorate to ensure the safety of all, commending the high-level security readiness of the civil defence personnel.

In this regard, HH the Governor gave directives to step up joint coordination to follow up on all complaints of the inhabitants of all the governorate’s regions and address them in the same way. HH Shaikh Khalifa bin Ali was also informed, through a video presentation, about the measures taken by the Southern Governorate Police Directorate to maintain security and public order by monitoring and handling the reports and complaints referred to it by the people and the measures and solutions taken in their regard, valuing highly the directorate’s high-level security performance and successful awareness-raising efforts.

HH the Governor commended the efforts of the security authorities for their contributions and constructive cooperation in the Southern Governorate’s summer activities and programmes. Representatives of the security departments commended the role played by His Highness the Governor in following up and implementing targeted security initiatives, as well as His Highness’s endeavourr to achieve them in accordance with the principle of pioneering community partnership.