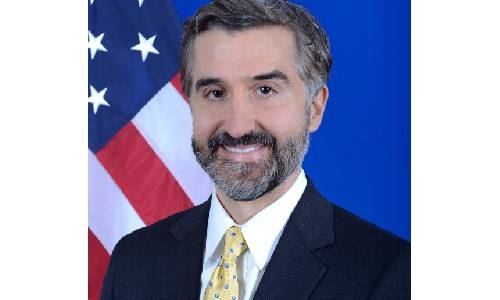 The Biden Administration is in its best efforts to find solutions to the global food crisis sparked by the Russian invasion of Ukraine, said Ramin Toloui, Assistant Secretary of State for Economic and Business Affairs.

Mr Ramin was presenting the Biden Administration’s stances on the crisis to the newspapers in the region including The Daily Tribune in a telephonic briefing when he made this statement. He said the global food crisis has badly affected the countries in the Middle East and North Africa.

“The situation wasn’t good as the global food production and supply were affected by climate change and Covid-19 pandemic. And Russian aggression would further worsen it leading to a huge crisis on a global scale.”

The Assistant Secretary of State said that Russian allegations of US sanctions leading to the crisis was baseless. “These are all baseless allegations as US sanctions don’t apply to food and fertilizers from Russia.”

“Kremlin has disrupted the global food system. Russian bombs have destroyed many farms in Ukraine, cut wheat harvest by half and Ukrainian farmers are in a disastrous condition. And there can’t be a permanent solution to this crisis without Russia ending this brutal war.”

He pointed out that the Russians even seized over 500,000 tonnes of wheat from Ukraine in an act of violation of all rules. Mr Ramin said the US has always taken the lead to mitigate the crisis. “Secretary of State Antony Blinken held a meeting with agriculture ministers and policy-makers of 90 countries on May 18 to discuss the challenges and ways to overcome them.

The US has already committed a $1 billion programme to fuel the food system in weaker countries. “We are working with the World Bank, IMF and other multi-lateral agencies to draw a plan and more help is on the way to navigate this incredibly difficult period.”

Mr Ramin said American farmers have an important role to play to end this crisis. “The US is a nation with high agricultural productivity and the Biden Administration is investing in new technologies, new methods in the agriculture sector apart from offering the right support.

“We will also be supporting nations across the world in developing better seeds, crops and strategies to make crops more resilient in places where weather is harder. Part of our plan is to address the immediate challenges from a humanitarian perspective.

But, in the longer run, we aim to increase the resilience and capacity of the agriculture sector around the world.” Together, Russia and Ukraine export nearly a third of the world’s wheat and barley, more than 70 per cent of sunflower oil and are big suppliers of corn.

World food prices were already climbing, and the war made things worse, preventing some 20 million tons of Ukrainian grain from getting to the Middle East, North Africa and other parts of the world.

Weeks of negotiations on safe corridors to get grain out of Ukraine’s Black Sea ports have made little progress, with urgency rising as the summer harvest season arrives. A study found that 400 million people worldwide rely on Ukrainian food supplies.

The UN Food and Agriculture Organization projects that up to 181 million people in 41 countries could face a food crisis or worse levels of hunger this year.