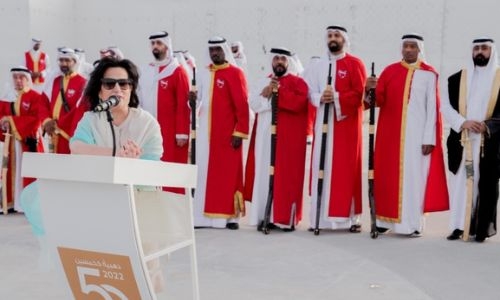 The Bahrain Authority for Culture and Antiquities (BACA) has inaugurated the first multi-storey car park building within the Pearling Path site project, which is registered on the World Heritage List in the city of Muharraq.

Shaikha Mai said: “We are pleased to see the dreams of a city in the ancient Muharraq become a reality, and we are opening today the first car parks that will serve visitors and residents of the Pearling Path site, which is registered on the World Heritage List, and will enhance the city’s infrastructure.”

“It will implement this part of the Pearling Path project, years of work, communication, and cooperation with various parties to complete the car parks that will serve as an outlet for Muharraq, which faces several issues connected to overpopulation.” She said that the Pearling Path site project is one of the most important infrastructure enhancement projects in Bahrain, and through it, culture aims to revive the historical sites in the city of Muharraq.

It will also upgrade residential neighbourhoods in order to return the people of Bahrain to the city and provide a cultural destination that attracts visitors from inside and outside Bahrain and attracts cultural tourism, she added.

The multi-storey car park is the latest project of BACA on the Pearling Path in Muharraq. The project consists of four buildings distributed along the path. The building, which was opened, accommodates about 130 cars and consists of a ground floor and a first floor.

The execution of the main building contractor is Mohammed Abdulmohsin Al Kharafi & Sons Company. The construction of the remaining three parking lots is scheduled to be completed between the end of 2022 and the beginning of 2023.

This part of the Pearling Path project aims to provide parking for the city’s residents and visitors to the Pearl Mashhar site alike, and will enhance the infrastructure of Muharraq as it is considered a public place. The parking lots are distinguished by a unique engineering design and will add new spaces to Muharraq, adding to the splendor of its urban fabric.

The architects of the project designed each floor of the new parking lots in a distinctive way, and the focus was on the communication element in the design so that the floor of each floor aligns with the slopes connecting them to reflect the positions of the cultural elements and the ancient heritage contained in the site of the Pearling Path.