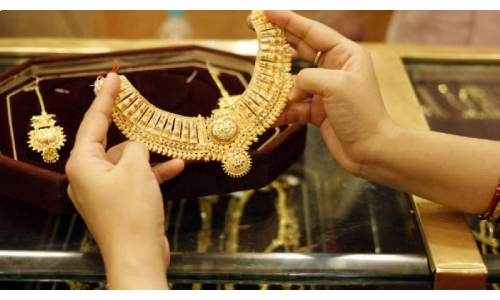 The increase in Value Added Tax (VAT) from five per cent to 10pc along with the price rise of the yellow metal led to a decline in gold sales on Valentine’s Day in Bahrain.

Every year in the Kingdom, Valentine’s Day has been an important day on the sales calendar for all jewellery houses.

Unlike the previous years, presenting a Valentine’s Day gift in gold or jewellery proved to be a little expensive affair for many yesterdays as the gold price stood at BD21.9 per gram apart from the increase in VAT.

The gold price is this year’s highest, which is attributed to tensions between Russia and Ukraine.

Historically, any turbulence in global affairs has led to gold price rise, reinforcing its status as a safe-haven asset.

With more people across the world opting for secure investments, the higher the prices of gold soar.

According to data from The Gold Bullion Company, around this point last year the gold price per troy ounce hit a low of $1648.69.

A year later, the spot price for gold has steadily increased and surged to $1849.53 per troy ounce.

Speaking to The Daily Tribune, a gold retailer said Valentine sales did not match the expectations.

“Gold and jewellery sales have not been up to the mark since the beginning of the New Year.

The increase in VAT from five per cent to 10pc has led to a decline in sales and we are expecting it to catch up in the next few months as the consumer spending increases in post-pandemic economic recovery.”

He said the Valentine Day customers were a mix of citizens and expatriates as “everyone celebrates Valentine’s Day”.

“Diamond jewellery, earrings and pendant sets were among the most favourites of customers on Valentine’s Day.

However, ornaments and products varied based on purchasing capacity.”

Another retailer said Valentine’s Day sales were “not too good… not too bad”.

“Some product lines saw good sales while others saw a decline compared to previous years.

We can’t give you a perfect picture of today’s sales now but I can say it was not as bad as expected.”

He said Valentine’s Day sales have to be read with the general decline in gold sales following the increase in VAT.

“Since the beginning of the New Year, our sales have declined by 30pc compared to last year and this is just due to VAT increase as well as gold price rise.

I hope things will improve in the coming months.

“We expect more lovers to hit the gold stores on next year’s Valentine’s Day, fuelling our post-pandemic sales growth.”