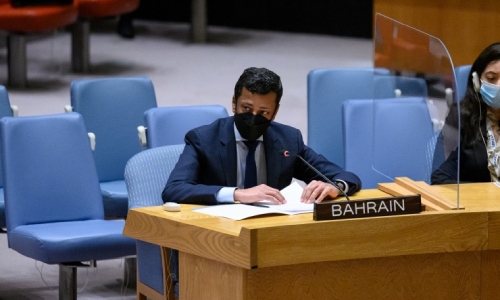 Bahrain has denounced the continuous terrorist attacks of the Houthi militia, which target civilians, infrastructure and vital facilities as well as destabilize security and stability in the region, including those carried out on the territories of the brotherly Kingdom of Saudi Arabia, resulting in civilian casualties.

The Kingdom denounced strongly, the heinous terrorist attacks, recently launched on civilian facilities in Abu Dhabi, killing three civilians, and injuring others as well as it decried the kidnapping of the UAE-flagged cargo vessel Rawabi.

This came in Bahrain's speech delivered by the Permanent Representative of the Kingdom of Bahrain to the United Nations in New York, Ambassador Jamal Fares Al-Ruwaie, at the open debate of the Security Council on the situation in the Middle East, including the Palestinian question.

Ambassador Al Ruwaie said that the Kingdom regards these Houthi attacks on civilian facilities and civilians as war crimes, flagrant violations of all international laws and blatant attacks on the territories of the two countries.

He stressed Bahrain’s support for all measures to both countries would take to preserve their security and stability as well as the safety of their citizens and residents.

The ambassador has also called on the international community to take firm steps against this militia, whose criminal acts confirm its terrorist nature and poses a serious threat to the security and stability of the region and the world.

On the peace process in the Middle East, the permanent representative stressed the importance of intensifying international efforts and resuming negotiations between the Palestinians and Israelis to settle the Palestinian issue by the two-state solution, based on the resolutions of international legitimacy.

He said the Kingdom believes in the importance for the international community to act quickly and develop a comprehensive vision that would address security, political and economic challenges.

Improving the humanitarian situation, he affirmed, begins with establishing peace, and providing the causes of security and stability for all countries in the region, especially since the Middle East is facing unprecedented challenges that require effective action.

He stressed the importance of cooperation between all parties to achieve sustainable peace in the region, so as the region could unleash its potential through closer cooperation in various areas of common interest.

India all set to witness its first wedding reception in Metaverse