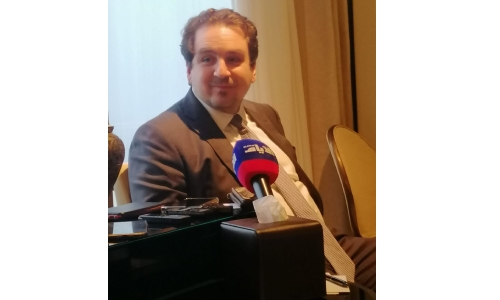 The Manama Dialogue 2021 showcases the importance of Bahrain’s role in regional security, politics and trade, said a top US official during a press meet on the side-line of the summit.

Daniel Benaim, the Deputy Assistant Secretary of State for Arabian Peninsula Affairs in the Near East Bureau at the US Department of State, said that he feels like the whole world is here in Manama seeing the summit currently underway in Bahrain.

“The eyes of the region are on the Kingdom, and that is a very good thing as the most important conversation regarding the region is currently happening in Bahrain.”

Terming the US-Bahrain partnership as “old and enduring”, he said it goes back decades and remains “deep and strong”. Quoting US Defence Secretary Lloyd Austin, who spoke earlier yesterday at the summit, Benaim said America remains “very invested in this region.”

Austin’s speech, he said, sends a clear message on America’s resolve and commitment to defend its friends and interests in the region. He said the countries in the region are building on their capabilities to defend themselves and continue to work together through older forms of cooperation and embracing newer ones.

“We are now cooperating on new issues like COVID and older ones like terrorism and maritime defence,” he said. In this regard, he also pointed out the value of Bahrain as a partner to the United States is vital, citing the efforts of Bahrain in helping the US carry out the temporary evacuation of the 7,000 people from Afghan.

“This effort was part of the evacuation of over 120,000 people from Afghanistan, which for the United States was a national honour,” he stressed. The US, he said, is working to find a new future for them.

"When a crisis emerged in Afghanistan for the US, our partners stepped up and stayed part of a collective effort many times. “There will be Afghan-America who will be living in the US and remember their times in Bahrain and look favourably on the part that Bahrain chose to partner with the US in this historic effort, which is an incredible thing.

“This reflects the strength of the Bahrain-US relationship,” he said. Looking forward, he said the US is learning from its experience, shared strategic thinking and consultation with the Gulf on framing the policy on Iran.

“There is a lot to think and decide together,” he said. Responding to a question on Iran, he said the US is “very serious” in considering the views of the Gulf partners. “Robert Malley, the special envoy for Iran, has been twice into Riyadh, Abu Dhabi, Doha, and is here in Manama, reflects the fact that the US want to listen and take a united approach.”

Explaining further, he said among the things the Gulf countries want, none of them wants Iran to pursue nuclear weapons, and looks at the reentry into JCPOA, which is part of a wider consultation, maritime security and the interference into inside affairs of states, among a range of issues.

“These are problematic issues not only to the region but also to the US. “The US, he said, is working incessantly to help countries in the region confront the malign influence of Iran in the region.” “We are working to build the defence capabilities of the countries of the region, and that work will continue no matter what happens in time.”

On the Houthi attacks on Saudi, he said Saudi Arabia is now getting rid of 90% of the projectiles shot at them using their defensive capabilities and doing an excellent job.

“There are now over 70,000 Americans working inside Saudi Arabia, which also points to the US interest in the region.” “So, Saudi’s security is a matter of our security as well.”