US committed to countering Iran: Lloyd Austin | THE DAILY TRIBUNE | KINGDOM OF BAHRAIN 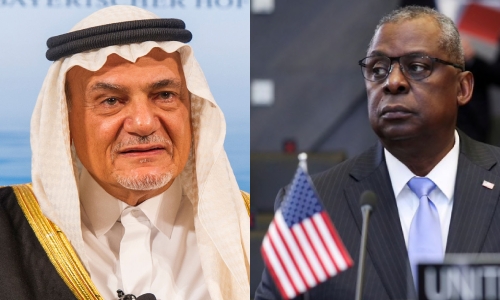 The United States is committed to countering Iran, even as Washington works to revive the 2015 nuclear deal, said US Secretary of Defence, Lloyd J. Austin III. “We remain committed to a diplomatic outcome of the nuclear issue. But if Iran isn’t willing to engage seriously, then we will look at all the options necessary to keep the United States secure,” Austin said.

The Pentagon chief said that Washington would join the indirect negotiations on reviving the deal, starting on November 29 in Vienna in good faith. “But Iran’s actions in recent months have not been encouraging - especially because of the expansion of their nuclear programme,” Austin said.

Austin also highlighted the importance of joint actions against common threats by the United States and its allies. Iran, he said, is the number one cause of instability in the region and even beyond. “Confronting the threats posed by Iranian marches is one of our priorities, as the countries in the Middle East face this danger daily.”

On the Yemen crisis, the US Secretary of Defence urged Houthis to end the war in Yemen and stop the attacks on Saudi Arabia.

“We are working to strengthen Saudi air defences and will help Saudi Arabia in confronting Houthi attacks from Yemen.” “We will continue to support Saudi Arabia until it can repel all Houthi attacks.” Austin touched on the relations between Israel and the Arab countries, noting that they “constitute a new reality in the region.”

He said, “We will work to develop and modernize our relations with our friends in the region.” The security threats in the region must be confronted with a joint effort, as weapons alone cannot achieve security or peace in the world.” The message for any potential adversary, he said, is that “the cost of aggression is greater than any gain.”

“‘Iran should have no illusions that it can undermine our strong relationships in the region. And we will defend ourselves, and our friends, and our interests,” he said. “We’ll continue to evaluate the right mix of forces to bolster our deterrence against Iran.”

Will maintain the fight against terror

In Afghanistan, the US Defence Secretary said: “We will maintain the fight against terrorism despite the withdrawal from Afghanistan.”

Turning to the Lebanese crisis, he said, “We stand with the Lebanese people at this difficult time.” Regarding Iraq, Austin said: “We support the sovereignty and independence of Iraq against any party that tries to threaten it and will continue to support partners in Iraq and Syria to counter ISIS. “We must work together to confront terrorism in Afghanistan, whether it is al-Qaeda or ISIS.”

The US Secretary of Defence also touched upon the fight against the Corona pandemic. “We have provided large quantities of Corona vaccines to partners in the region. Corona, climate change, and Iran’s support for terrorism are among the most prominent challenges,” he stressed.

Washington is pressing Riyadh to lift a coalition blockade on Houthi-held areas, a condition from the group for ceasefire talks. Austin was to visit Saudi Arabia in September but postponed it at the last minute. He will not be visiting Riyadh on this trip

“Lebanon needs to show that Hezbollah can change behaviour”