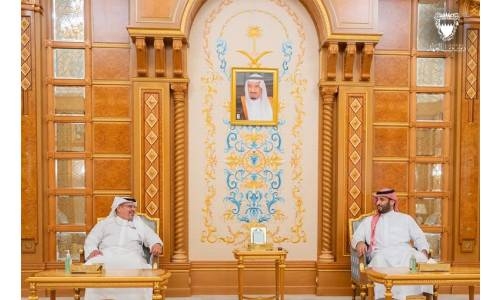 His Royal Highness said that the ambitious environmental goals and new avenues of cooperation that have resulted from the 5th edition of the Future Investment Initiative (FII) and the Middle East Green Initiative Summit are testament to the success of both events.

During the meeting, HRH Prince Salman highlighted the depth of long-standing relations between Bahrain and Saudi Arabia, which continue to receive the committed support of His Majesty King Hamad bin Isa Al Khalifa, and the Custodian of the Two Holy Mosques, King Salman bin Abdulaziz Al Saud.

The importance of creating a unified and coordinated response to preserve the natural environment and address the challenges of the climate emergency while ensuring a sustainable economic recovery was also discussed.

The topics of both the FII and the Middle East Green Initiative Summit were also reviewed.

HRH the Crown Prince and Prime Minister commended the initiatives launched by HRH Prince Mohammed bin Salman at the Middle East Green Initiative and noted that they will contribute towards achieving climate security and a sustainable future.

His Royal Highness noted that FII will expand investment cooperation and stressed Bahrain’s commitment to developing the fruitful partnership that exists between the Kingdoms.

HRH Prince Salman commended Saudi Arabia’s role as a leader of the Arab world and its contribution to upholding regional and global stability.